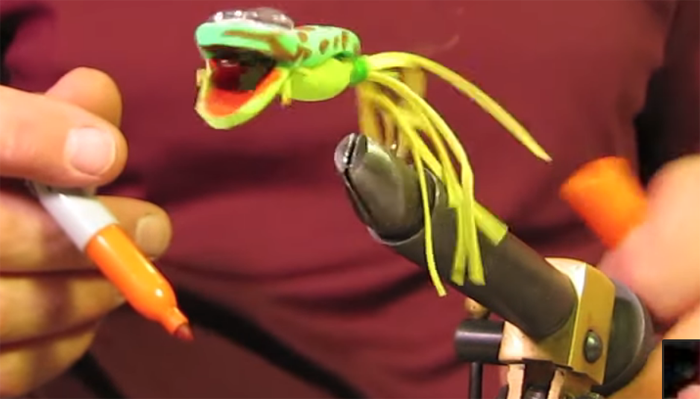 So, what is this thing?

I say it catches fish because it has, albeit hungry largemouth bass, and huge crappies that must be frog-a-holics that cannot resist a splashdown froggy like this one – it does not make it five feet, and they’re on it.

If you google YouTube for frog ties, you will see dozens of tying instructions on froggies. Like the fish, I tie flies that have enticed me and then vetted have a reported history of actually getting bites.

The “eyes” don’t have my vote

This little froggy with eyes that have no useful attraction other than to birds and Mr. Tedrick, the tyer in the video, the froggy fly is one of those flies that gets hammered in a war zone.

My friend Mike’s froggy was tied about a third smaller than mine and I understaffed it with legs to aid his casting. However, we scored near dual results on strikes and caught fish [largemouth and crappy]. That’s because Mike is an accomplished bass fisherman. If Mike were more familiar with fly casting, he’d have out fished me for sure.

The reality of the outing where and when we fished Mr. Tedrick’s froggy was one of those days. The ponds we fished were unpestered in private water, the fish were hungry, and the water was almost a perfect temperature.

Try froggy as tied by William B Tedrick . . .