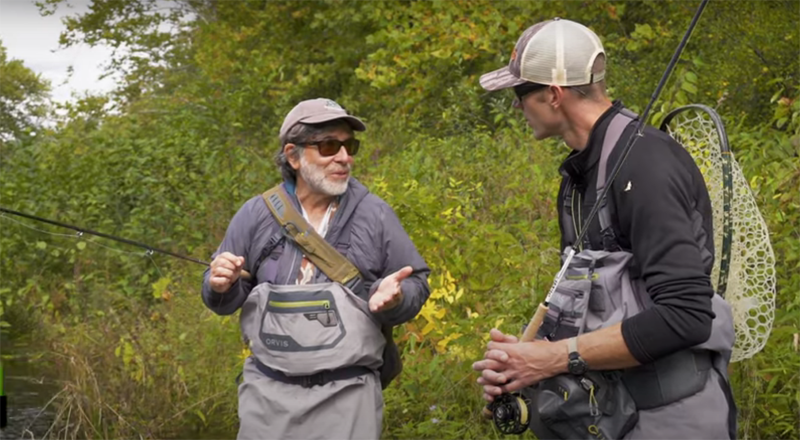 Tips & Tactics: Comprehensive Euro nymphing and getting your doctorate

A break in the fishing for a scholastic discussion. Tom Rosenbauer from Orvis [L] and George Daniel.

If you can pay close attention for 48 minutes, afterward, pick up your EURO Nymphing Ph.D.

Today, there are several versions of Euro nymphing, and it has been maturing since Frank Sawyer began its circuitous European tour post-WWII. Sawyer developed and refined the technique of using weighted nymphs fished upstream to trout and grayling feeding near the bottom and called it the “Avon or Netheravon Style.” It is also quite likely he invented the tuck cast – he described the cast in his book ‘Nymphs and the Trout’.

It would be difficult to argue that Sawyer, a Riverkeeper on the famed Avon of England, wasn’t the originator of upstream nymphing. We’re still using the fly he designed that started it all, the Pheasant Tail, and copying much of his nymphing technique.

Nymph fishing “text” books and club bar knowledge of it, as known up until 1989, ended dramatically in Kuusamo, Finland. The event was the World Fly Fishing Championship. A Polish national showed the world, in a world fly fishing tournament, how nymphing works. To this day it is still copied – only minutiae stands between it since that tournament in Finland, and, of course being reborn to new fathers of new nationalities.

“A gaggle of journalists and bystanders were following and watching in wonder and curiosity: Who was this guy dressed in an unconventional vest, wearing garden boots for waders, and casting a mended fly rod? He was tenacious, and very competitive, with a broad, quick smile — friendly to a fault. The mystery angler was Wladyslaw Trzebunia, then a member of the Polish national Fly Fishing Team. ‘Vladi,’ as he is known to his friends, is the man who knocked the fly-fishing world on its butt.”

In the mid-1930s, Vladi’s father had discovered that when he pulled his baited hook downstream faster than the current, he caught more fish. Here’s the takeaway: The fish were attracted to the motion.

“Back to the 1989 tournament: Using the same primary method his father had taught him as a youngster (with refinements, to be sure), Vladi landed a staggering total of 60 fish. That number was more than all of the 2nd, 3rd and 4th teams combined! Wladyslaw Trzebunia won the individual title–and a dazzling gold medal—and the Polish team took the team title.

Since that 1989 competition, the nymphing that method Vladi pioneered, and the Polish team used, has been imitated, appropriated, and re-named throughout Europe, and the rest of the fly fishing world. Over time, Vladi’s method has been reborn with many names.” — Richard R. Twarog

So with a grain of salt, take the best we have, George Daniel and the fly fishing ambassador for Orvis, Tom Rosenbauer, proving Vladi’s upstream nymphing method works, and if you follow Wladyslaw Trzebunia’s recipe, as taught by Daniel and utilize the newer, space age materials, you’re a shoe in for tenured professorship.

NOTE: Twarog is the author of The San Juan River: A Fly Angler’s Journal. Vladi is a licensed guide in Poland and Slovakia and continues to give seminars and teach international competitive teams and individuals. You can reach him via e-mailvladi-trzebunia@wp.pl.

It’s all here, click on the start tab and come away with a Ph.D. We’d love to go to your graduation, but because of the times we live in we’ll do a drive-by and honk . . .