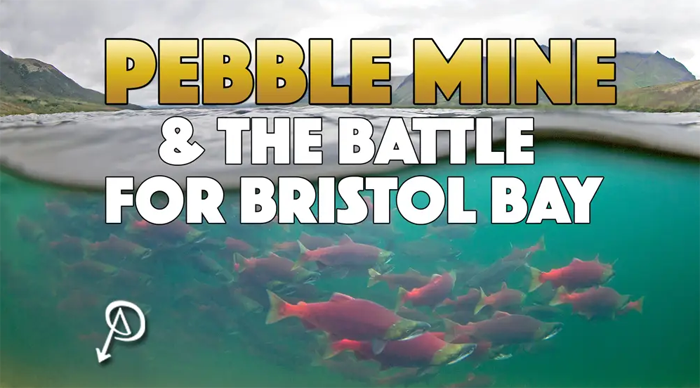 Screen shot – YouTube film by Its Going Down [IGD].

WASHINGTON (July 30, 2019) – The Environmental Protection Agency (EPA) today withdrew protections for Bristol Bay, Alaska from the Pebble Mine – a colossal, widely condemned gold and copper mine that poses a threat to the area’s famous salmon runs.  The agency’s action signals that it intends to clear the way for the Army Corps of Engineers to issue a permit for the controversial mine.

The following is a statement from Joel Reynolds, a senior attorney with the Nature Program at the Natural Resources Defense Council:

This outrageous move is the Trump Administration’s gift to a foreign mining corporation at the expense of Bristol Bay’s fish, aquatic resources and community. Yet again, the agency charged with protecting our public health and environment is abandoning science—and the public—in order to advance the interests of a wealthy few.”

The proposed mine would threaten the world’s greatest wild salmon fishery that generates $1.5 billion in annual revenue and 14,000 jobs.  Salmon have also sustained the subsistence culture of Alaska Natives for millennia.

This reversal comes just weeks after the EPA asserted to the U.S. Army Corps of Engineers that its draft Environmental Impact Statement (EIS) lacked critical information, underestimated the risks to water and fish, and was insufficient to support compliance with the Clean Water Act.

Moreover, this latest about-face by the EPA, is just one in a long line flip-flops by the agency.  Before today’s withdrawal, the EPA made a proposed determination (2014), proposed to withdraw it (July 2017), and then suspended its own plan to withdraw the protections (January 2018).

Under Section 404(c) of the Clean Water Act, the agency’s proposed determination (that it withdrew today) would have allowed the agency to restrict, prohibit, deny, or withdraw the use of Bristol Bay a disposal site for dredged or fill material upon the agency’s determination that the discharge would have unacceptable adverse effects on municipal water supplies, shellfish beds and fishery areas, wildlife, or recreational opportunities.

The EPA had proposed these common-sense restrictions under the Clean Water Act in 2014 in response to requests by Bristol Bay tribes, the Bristol Bay Native Corporation, the commercial and sport fishing industries and others.

Under a different section of the Clean Water Act, 404(q), EPA and the Army Corps of Engineers must communicate about the project.  However, EPA is not empowered to halt the Pebble Mine, as it would be under 404(c). And it’s unclear – despite today’s announcement – whether EPA will formally invoke the 404(q) process, having missed a deadline on Friday to send notice to the Corps.

To read more, here is a blog by Taryn Kiekow Heimer

The EPA’s Notice of Decision to Withdraw Proposed Determination is here.

The Natural Resources Defense Council (NRDC) is an international nonprofit environmental organization with more than 3 million members and online activists. Since 1970, our lawyers, scientists, and other environmental specialists have worked to protect the world’s natural resources, public health, and the environment. NRDC has offices in New York City, Washington, D.C., Los Angeles, San Francisco, Chicago, Bozeman, MT, and Beijing. Visit us at www.nrdc.org and follow us on Twitter @NRDC