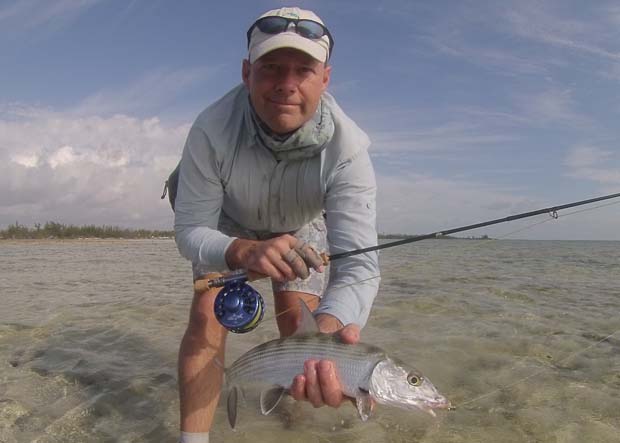 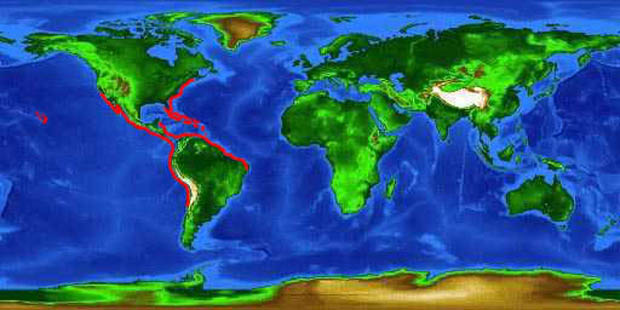 Bonefish are predominately a coastal species, commonly found in intertidal flats, mangrove areas, river mouths, and deeper adjacent waters. The flats vary in composition from sand or grass to rocky substrates. Bonefish can tolerate the oxygen-poor water they sometimes encounter in coastal habitats by inhaling air into a lung-like air bladder. Bonefish typically school, sometimes in groups of up to 100 individuals. Studies in the Bahamas using ultrasonic telemetry demonstrated the daily patterns of bonefish consist of a movement to shallow water during the rising tide, and a retreat into deeper water during a falling tide. Bonefish are also known to move from particular sites (creek, channel, bay, etc.) after inhabiting the location for a maximum period of several days. Over the long-term movements between such “favorite” sites seem to occur without any discernable pattern. During summer months, larger individuals tend to remain in deep water, rarely moving onto the flats; they reappear in autumn, as water temperatures grow cooler.

One of the most distinctive characteristics of the bonefish is the inferior mouth and conical nose that protrudes a third of its length beyond the mandible. The body is slender, round, and compressed, more so in large specimens than in young adults. The dorsal profile is more convex than the ventral profile. The first few rays of the dorsal fin are higher than the following rays and this lends a somewhat triangular shape to the dorsal fin when erect. The caudal fin is deeply forked, with the upper lobe slightly larger than the lower.

Bonefish appear blue-greenish above, with bright silver scales on the sides and below. Dark streaks run in between the rows of scales, predominantly on the dorsal side of the body. The dorsal and caudal fins have dusky margins. Bonefish have no spines. Juvenile bonefish exhibit a series of nine dark crossbands on their backs. These bands extend nearly to the lateral line, with the third band crossing at the origin of the dorsal fin. Bands four and five are found under the posterior base of the dorsal fin. As the juvenile bonefish age the bands begin to disappear with the posterior bands the first to fade. Beyond about 3 inches (7.5 cm) the dark longitudinal streaks characteristic of the adults begin to appear and the last of the crossbands become obscured.

Granular teeth, forming specialized dental plates, cover the tongue and upper jaw of the bonefish. Similar grinders are also present in the throat. The bonefish uses these modified teeth to grind its mollusk and crustacean prey.

In the Caribbean Sea and western Atlantic Ocean, the bonefish reaches a maximum length of about 31 inches (77 cm) and a weight of 13 or 14 pounds. Floridian and Bahamian fish often range from 4-6 pounds (1.8-2.7 kg), with fish over 8 pounds (3.6 kg) regarded as large. However, bonefish taken from Africa and Hawaii may attain weights over 20 pounds (9.1 kg). Bonefish reach sexual maturity between 3 and 4 years of age, at which point they are typically between 17 and 19 inches (43-48 cm) in length. Bonefish may live in excess of 19 years.

The bonefish uses its conical snout to dig through the benthos to root up its prey, which it crushes and grinds with its powerful pharyngeal teeth. Bonefish feed on benthic and epibenthic prey, often in water less than 30 cm (12 inches) in depth. In south Florida, the prey consists primarily of crustaceans (xanthid crabs, portunid crabs, alphiid shrimp, penaeid shrimp), mollusks (clams and snails), polychaete worms, and fishes (primarily the gulf toadfish, Opsanus beta). The gulf toadfish is commonly found in the stomachs of larger bonefishes. Bahamian populations of bonefish appear to feed more heavily upon bivalves than do Florida Keys bonefish. Bonefish forage primarily on the flats, entering shallow water on rising tides. While in motion, schooling bonefish travel at the same speed and at a constant distance from each other. When feeding, the bonefish disperse slightly from the school but will reunite if frightened, again traveling in a patterned formation. Bonefish do not always travel in schools, but may also be found singly or in pairs. Schools of similar sized fish may consist of 4-6 individuals, or may number in the tens or hundreds. Large adult specimens are solitary.

Sharks and barracuda often prey on bonefish. Bonefish are built for speed out of necessity, as the only defense they have is to flee their predators. Bonefish are alert and wary; whole schools may be easily spooked, making them difficult for fishers to catch.

Bonefish populations may not be affected by overfishing thanks to widespread catch and release practices, the fish may suffer from post-release mortality, poor water quality, habitat destruction, global warming and coastal over-development.

Prepared by: Sean Morey of the Florida Museum of Natural History 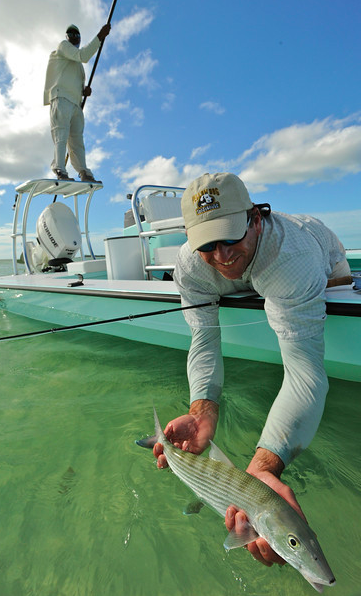 Steelhead fanatics call it the fish of a thousand casts – combine that trout with others, add salmons, tarpon and bonefish and you’ve got a thousand years of reading ahead of you. Those species have fascinated fly anglers for centuries and more tomes have been written about them than countable. An Amazon Google regarding them would take more than a day to conclude.

Additionally, the survival adaptations of those species, developed over the millenia, are fascinating.

A fly angler fishing for bones has a good, probably better chance of catching one than a bait chucker or spin angler. However, a fly angler has to be a better athlete – able to pitch a fly 50-feet or more with no or just one false cast and hit a targeted spot. While a permit may instantaneously eat a fly that hits it on the nose, a bone will scoot and never eat your fly – bones need to encounter your fly.

The scenarios vary fishing for bones. Smaller bones tend to school in large groups of up to a hundred or more. Larger animals seem to prefer small groups of two to five. Those bigger animals found in the Florida Keys area of Islamorada and Key Largo, tend to be loners in the ten-pound class or bigger.

Learning to catch bones is best done in the Bahamas. There, they’re plentiful and good eaters. Generally, they’ll be in the 3- to 5-pound class, but a week of fishing in many of the Bahamian out islands will guarantee shots at much bigger animals. There are dozens of other destinations that will put you on bones: Los Roques, Venezuela; Belize; Yucatan, Mexico; Seychelles; Hawaii and more, but the Bahamas are only 50 miles away for Florida.

The best book on fly fishing for bonefish is Chico Fernadez’s “Fly Fishing for Bonefish” with biology by Aaron Adams, PH.d. The best association to aline yourself with and get a lot out of it is the Bonefish & Tarpon Trust, which also covers permit. The newest study on bonefish is about the history of bonefish guides in the Bahamas, a PH.d. undertaking by Tom Karrow. To view his “Ghost Stories” overview click here . . .  and here  . . . You can donate to his effort here . . .