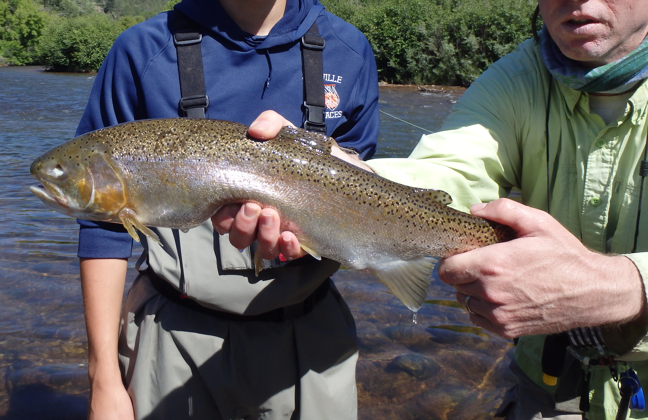 Conservation: Is that photo really worth it?

[dropcap]T[/dropcap]he editors of this magazine, and I as its publisher get to read some 70 or more wires a day, seven days a week. That gets us, sometimes, into some pretty thoughtless rhetoric, but occasionally into some pretty interesting and unexplored thinking. One that caught our eyes recently came from New Zealand. A place I called home for nearly six months. Much of it spent with fly fishing legend, sportsman, author (New Zealand Fly Tying, and I Mind One Time) and personal mentor, Hughie McDowell.

What I learned from him put me in a new league.

One of those learned lessons was how to handle, if need be, a fish that was scheduled for a release. We’ve all seen how the need for a photo can literally assure the animals death if done improperly. For example, a recent study conducted by a group of Canadian fishery biologists found, after tagging dozens of caught and released steelhead, that their tracking devices stopped showing movement after just a few hours or less – all the fish were dead. They determined that the steelies caught were hauled to shallow water and beached on the rocks. There, they literally beat their brains out and thus died just hours later. (To read complete story click here […] )

“BISH and FISH: From New Zealand; Just Fly Fishing Stuff” (a blog) had this to say about handling a fish that was to be released, trout specifically:

Have look at the anatomical drawing below showing the main internal structure and components of a trout. Take particular notice where the heart is (red outline) – between and under the gills and liver, just above the Pectoral fins. These three organs, heart, gills and liver are very susceptible to damage, although not always immediately obvious, unless the damage is very severe leading to immediate death. A fish subject to external pressure to the heart and other organs may swim away on release, but many die soon after.

Gripping a fish in the pectoral area using inward force and squeezing pressure will compress the heart and maybe the liver and gills. The outcome for the fish is not going to be good, even if it does manage to swim away on release.

So we should have a look at a gallery of grip and kill photos copied from the web and magazines – any ID of the person holding the fish has been removed. I should also note that some or even all of these fish were not released – I could not tell.