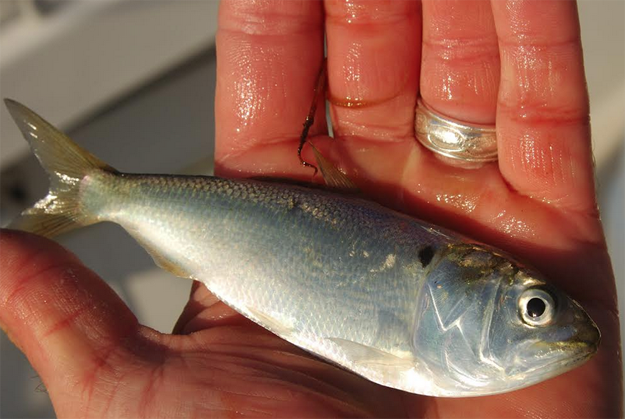 If You Guide Or Sport Fish The Eastern Seaboard You Need To Read This And Punch In. Yes, We Have A Voice

[dropcap]I[/dropcap]n 2012, the Atlantic States Marine Fisheries Commission (ASMFC) took action that nearly made me faint dead away. I honestly never thought I’d live long enough to see the ASMFC get serious about managing the Atlantic menhaden fishery sustainably – but they cut the harvest by 25 percent compared to 2011! Actually, I never thought they’d ever get serious about it at all. But over the past five years, enough voting members from diverse states along the Eastern Seaboard have summoned the political bravery to turn around the alarming decline of what many scientists call “the most important fish in the ocean.” But as someone with nearly 70 years worth of menhaden memories, I strongly caution the ASFMC against continuing to increase harvest levels so early in the species’ rebound and urge them to adopt management practices that recognize the role this vitally important forage fish plays in coastal and marine ecosystems. On Wednesday, October 26, 2016, the ASMFC will meet in Bar Harbor, ME to make these critical decisions.

I’m encouraged by the science that indicates menhaden, also known as bunker, pogy, and fatbacks, are rebounding. I’m left hopeful by the reports that these historically far-ranging fish have returned in some numbers to places where they’ve been absent or nearly absent for decades. Our readers and contributors have reported big shoals of menhaden along the Mid-Atlantic, and the return of menhaden to waters off northern New England, Boston Harbor, and even the Gulf of Maine. But my caution to my fellow brothers and sisters of the angle and our allies in those regions is as follows:

Don’t settle for what you’re seeing now, because few of you have an idea what a healthy menhaden population looks like. You deserve better. It has only been a scant four years since the ASMFC finally made significant enough cuts in harvest levels for the fish to begin rebuilding.

I offer this advice as an elder statesman of our sport. I grew up fishing in the waters off New Jersey and New York back in the 1950s, when, if you went offshore during the summer and fall, you could practically walk across giant schools of extremely large menhaden. The sheer numbers of birds diving on them would absolutely astound young anglers today. And the striped bass and bluefish we caught around those schools were often twice the size of what we’d now call a “nice” fish. Granted, there was less fishing pressure, but 40- to 50-pound bass were commonplace. Fish simply don’t get that big unless extremely nutritious forage, such as menhaden, is abundant and available. The once commonplace schools of full-sized menhaden provided fish, birds, and marine mammals with the energy they needed to grow large and reproduce in sufficient numbers. Today, we’re asked to be satisfied with catching skinny bass pocked with lesions due to malnutrition. 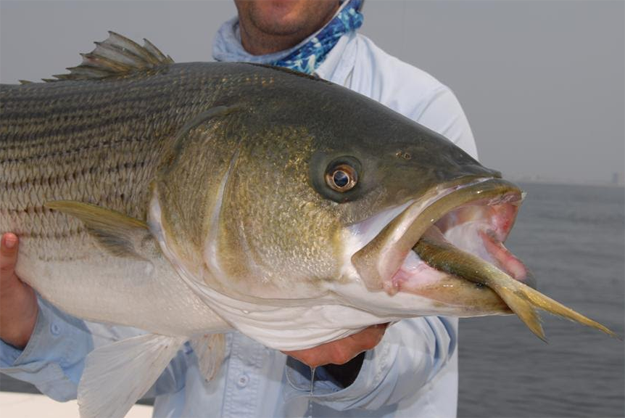 Everybody eats when the big guy eats. Photo David Landman.

What I’m warning fellow anglers against is called “shifting baselines.” In this phenomenon, each generation of fishermen knows only what they’ve witnessed first-hand on the water and primarily uses such experiences from their early careers to evaluate changes in the fishery. For those of you in the Mid-Atlantic and New England who started fishing around menhaden schools over the past three or four decades, today’s menhaden numbers may seem awesome, but would surely pale against any scientific quantification or fisherman’s observations from when I started fishing in the 1950s.

There’s nothing in the laws of nature that says humans must unwittingly live with ever-declining natural resources. In fact, we’ve restored numerous fisheries to levels that even scientists said were previously unimaginable. If given enough of a chance, our menhaden population could improve to levels that support the nutritional needs of predator fishes, birds and marine mammals all along the Eastern Seaboard—even in the southern states where no real increase in menhaden populations is yet apparent.

Whether we live to see the full coast-wide recovery of menhaden depends on pending management decisions. At the first indication of a rebound, the ASMFC increased harvest levels for 2015-2016 by 10 percent. This past August, ASMFC was tempted to increase the harvest again, but the vote ended in an impasse. Next week, the ASFMC will again vote on whether or not to increase the harvest. I urge them not to. They simply do not have adequate information to take such a risk. By keeping harvest levels where they are, or reducing them, and by moving forward with ecological reference points (ERPs), the ASFMC would make certain that the “good old days” are ahead of us.

In August, the ASFMC thankfully did agree to move forward with developing a new menhaden management strategy that depends upon ERPs, which establish how many menhaden we must leave in the water to support the ecosystem – including the nutritional needs of predator fishes, birds and marine mammals – before deciding upon what levels of human harvest are sustainable. These are the best scientific tools against insidious shifting baselines, and offer us the ability to grow and expand the population to healthier levels.

Next week, the ASFMC is expected to finalize the content of the Amendment 3 Public Information Document (PID) that it will release for public comment and hearings later this year. The document will describe various alternatives for ERPs and how they would work. The current draft is inclusive of a broad array of options, and that’s good news.

We, the recreational fishing public, deserve a full suite of options to review in the PID. If you agree, join me, Coastal Conservation Association of Maryland, the International Game Fish Association, Snook and Gamefish Foundation, and many more anglers in letting the ASMFC know that you support the release of the Amendment 3 PID for public comment in its current form and oppose any catch increase. Please call or email your state’s ASMFC representatives listed here. And, if you live near Bar Harbor, then take this important opportunity to provide comments in person at the 75th annual ASMFC meeting this Wednesday, October 26, 2016.