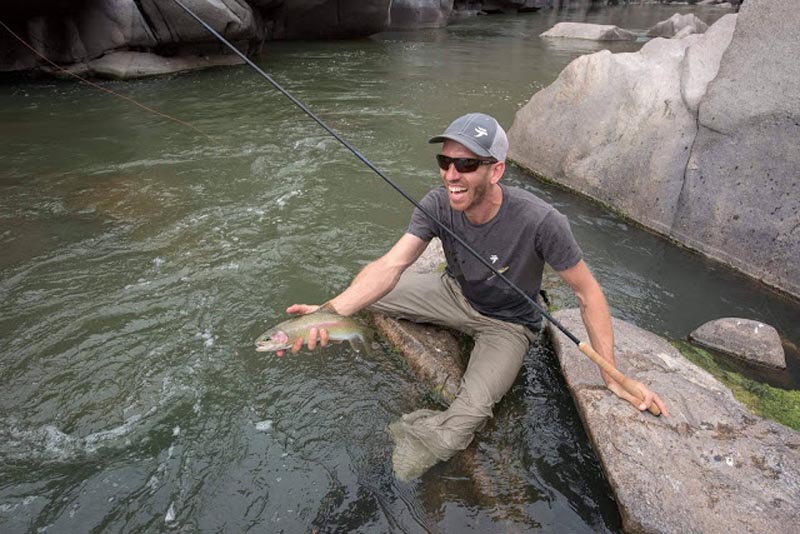 Fly Fishing: You can dap and nymph fish your way to ‘mo betta’ results 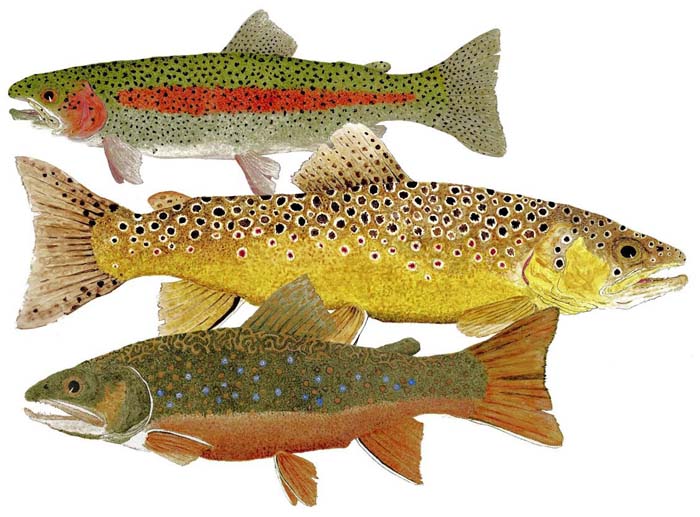 Nymphing or dapping flies with the best of them doesn’t take long to master because it has nothing to do with casting, but a lot about fishing

So, since fly casting is not required, like when fly fishing Tenkara, cane poling, or nymphing – a coordinated person can, in a few minutes be taught the mechanical basics and actually “fish” with realistic expectations, that does not mean a newbie will catch fish. However, an angler with a lot of spinning or bait fishing experience could do well very well nymphing/dapping/’Tenkaraing’ right away, but it does not mean he or she is going to know how to rig his or her fly rod or how to fish or even identify getting a bite. The best outcome suggested would be if guided by a pro.

Fly casting, learning how to, is reported as the major deterrent to permanently embracing fly fishing. And experts do sell BS

Casting a fly in the conventional style of overhand delivery is a mechanical process that requires a lot of practice and skill, and with double hauling being anti-intuitive, it compounds the difficulty, but when an “expert” suggests it’s the same for dapping – nymphing they are selling hogwash. It’s sorta’ like good ole boys selling the idea of facing danger is real and manly shooting a stationary Water Buffalo in Africa or spearing a harmless tarpon cruising an oil rig off the coast of Louisiana, like the Hell Divers has something to do with having hair on their chests, but it’s just insecure little boys dressing up like men.

Daniel W. Galhardo with a nice bow. Tenkara USA is based in Boulder, Colorado.

Dapping is the best way to enter the fly fishing world and avoid fly casting corona frustration. It provides the shortest learning curve to be a fly fisher and catch more trout than fellow metal, plastic, and bait chuckers, and in the right circumstance, a skilled streamer fly fisher fishing the same day  and the same water.

Some will cling to believing it is questionable to suggest that dapping and nymphing are simple with no real need to be a proficient fly caster to succeed, but it is that opinion that is questionable.

Nymphing and dapping are so simple that a noviciate can become a decent fish catcher in hours with barely any understanding of casting. That, however, cannot be translated into catching fish unless he or she has fished conventionally – understand where and how to present the fly – where the fly should perform in what water depth. And respond to the slightest tug floating or deep water fly.

There is another way to become a fly fisher without the normal dissuasion of conventional casting, and that is using a Henry fly rod – although not designed to perform nymphing, it can be dapped. A Henry fly rod is, however, much more intuitively responsive to casting more efficiently and achieving longer distances because it eliminates false casting, double-hauling, and coping with the physical demands of day-long adventures of overhand casting.

Authors note: The Henry Fly Rod & Reel company is NEW and on hold until this virus matter sorts out.

One can be skeptical to suggest nymphing is so simple that a new fly angler can become a decent fish catcher with barely any understanding of casting or how present the fly at the end of his or her line. Point of reality is that a newbie needs instruction on how to rig, or better, have their rod rigged for them and fish with a guide to learn “fishing” technique – the heartbeat of all successful angling. 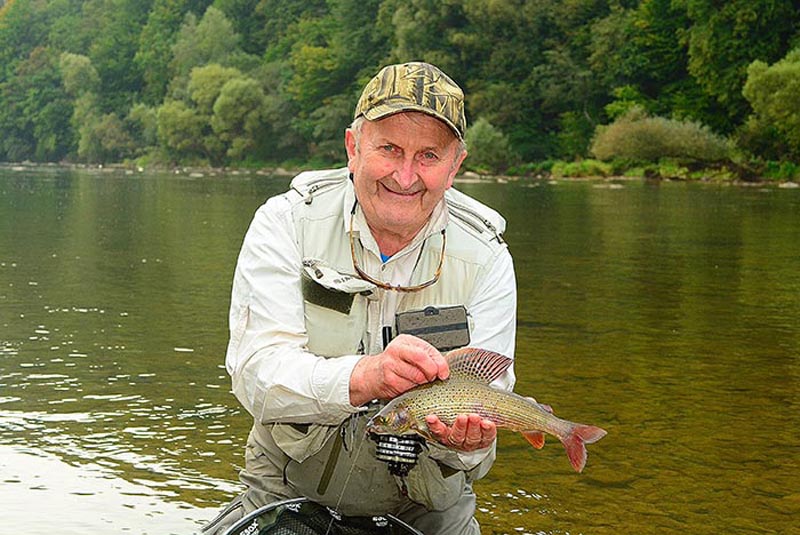 Wladyslaw “Vladi” Trzebunia blew everyone’s mind at the 1989 World Fly Fishing Championships with his European nymphing [Polish style].  There are no indicators, sighters, yarn, or colored line to use. This is an active, not passive, way to enjoy fishing. You’re triggering a strike, not standing there waiting and watching a bobber float by. You can use either a single weighted fly or a multi-fly rig. With a multi-fly rig, one of the flies (the anchor-fly) must be heavy enough to bring the flies to the river’s bottom quickly. Remember, the flies are not in tandem. Photos by Richard R. Twarog – story ORVIS News.

Which pole do I need?

The best fly fishing approach to ‘Montessorianing’ your way into the fly fishing club is, as previously stated, is nymph fishing for trouts and other freshwater fish like crappy and a few basses.

Get a fly rod that is 9-feet long because that’s the most available length and will give you the widest range of pricing to choose from. Maybe $25 on Craigslist or from a big box store and “Made In China” for $50. A fly shop up to $2,500 for a bamboo rod, but more like up to $1,200 for the top of the line made in the U.S.A., Canada, Europe, New Zealand, Scandinavia, and a few other coordinates. A fly shop will carry a line of fly rods like Orvis or Sage for instance, and those companies will hit every pocketbook, including entry level rods that someone would keep, and use when becoming an expert. A cheap rod will end up in the garage or fall apart when the angler improves. Never to see water again and thus $50 or more potentially burned.

The best way to enroll in nymph fly fishing is not on your own and not ordering a rod on Amazon or buying one from a big box store – go to a local fly shop, one that carries a big helping of equipment. There, you’ll get professional help from a guide or shop owner.

The next choice for a rod is a switch rod, which is best at up to 11-feet [here in the U. S. longer is suggested, but avoid longer]. Greater lengths, for newcomers, will present equipment managing issues of the most exasperating kind and advice to go long needs to be avoided. 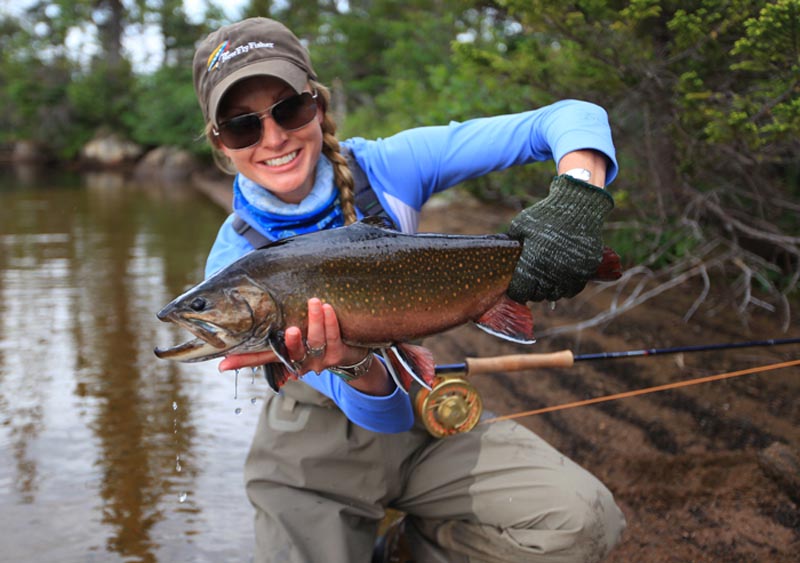 The third type of rod is a bit of a contradiction to the last suggestion because a manageable Tenkara rod can be 14-feet long, but transported it is only as long as the symphony director’s baton. It is not a fishable fly rod until telescoped out to the desired length. Pure Tenkara fly fishing only allows the fly to touch the water surface as a dry fly, and Tenkara flies are tied to enhance and ensure that.

The latter fishing style has morphed since Daniel Galhardo, founded Tenkara USA [2009], and introduced the ancient Japanese art to the western world. The natural tendency to “take it to the next level” has expanded the targeted fish using Thekara, but remains restrictive to so called cast conventionally because of the inherent rigging limit of the line used being limited in length [no reel].

I do not like dapping style fly fishing, but do occasionally enjoy Tenkara fly fishing, especially on small, fast mountain streams going after brook trout. Dapping is popular because, like bass fishing, it tends to be rewarding no matter the type of day – if the water temperatures are okay. Bass and brookies are aggressive snipers and some days hard to keep off the hook.

Enjoy some alone time during this Pandemic – take your kid along and teach him or her to dap or nymph, and a new fly fisher may emerge