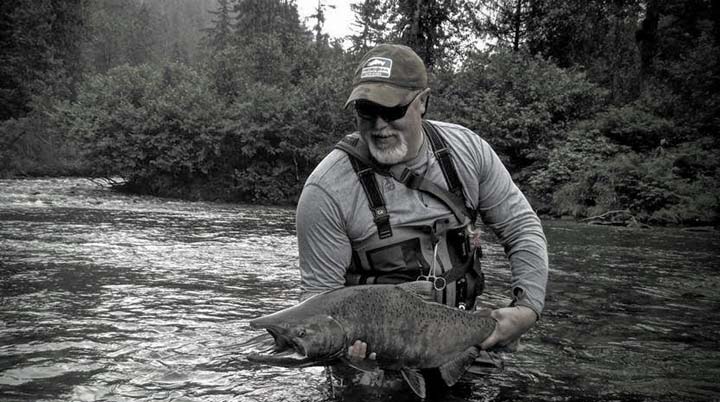 I asked why so many brookies, a 20 something a day take, except at Henry’s Lake? “Because brook trout can survive and thrive at a wide range of water temperatures and habitat conditions. They are found in mountain lakes and beaver ponds, where sediments make spawning conditions less than ideal for rainbow trout and cutthroat.

Brook trout [Salvelinus fontinalis], initially found in the eastern United States and Canada were stocked in headwater mountain lakes and streams in Idaho in the late 1800s and early 1900s. Their popularity back East the sole reason. Fish-management agencies used milk jugs, mules and horses to carry them into the Idaho backcountry. They soon moved up and down streams to pioneer new populations.

They are beautiful smallish trout. Actually a char like the Bull Trout. The latter being many times the brookies size, but in the fry stage [they share the same spawning calendar] brookies are bigger and gorge on their cousins. In the west Brook trout are a pain in the arse. As any brookie angler knows,

“Brook trout were originally found in the eastern United States and Canada. They were stocked in headwater mountain lakes and streams in Idaho in the late 1800s and early 1900s because they were so popular back East. Fish-management agencies used milk jugs, mules and horses to carry them into the Idaho backcountry. They soon moved up and down streams to pioneer new populations.” — David Parrish, fisheries program coordinator at Idaho Fish and Game. Idaho Statesman / March 2017

Could a sex change operation be the key to restoring native trout?

Scientists are attempting a novel approach to eradicating non-native brook trout in the West.

. . . [dropcap]T[/dropcap]oday, brook trout might be the most prolific invasive salmonid in the West—they are found in every western state save for Hawaii (yes, they were introduced into Alaska between 1917 and 1950).

Brookies are voracious fish that thrive in the cold, clean waters of the Rockies. They do so well that they outcompete native cutthroat trout, and in streams where bull trout are present, brookies can spawn alongside these native char and create a hybrid.

A Challenge to native trout reintroduction 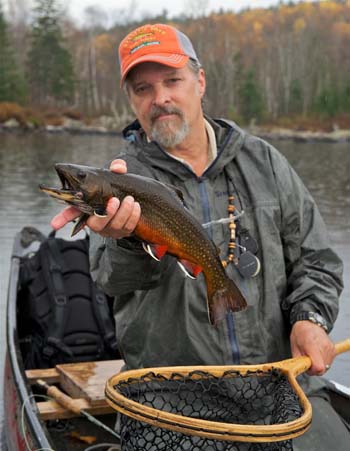 Bob Mallard, the most knowledgeable angle regarding brook trout with an original copy in Maine. Be sure to read this week’s book review of Squaretal [about brook trout] by Mallard.

While prized in their native range—up and down the spine of the Appalachians from Georgia north to Newfoundland and Labrador, and in the north woods of Minnesota, Wisconsin, Michigan, Quebec and Ontario—brook trout in the West are one of the most pernicious challenges faced by fisheries managers tasked with restoring native salmonids to their historical waters.

Over the years, fish and game agencies across the West have worked, oftentimes unsuccessfully, to remove brook trout from watersheds in order to restore native trout.

Back in the early 2000s, the USFWS was working to return native greenback cutthroat trout to their native ranges in the South Platte and Arkansas river drainages in Colorado—the brook trout was the agency’s greatest nemesis. I visited one particular stream in the upper Arkansas Valley in 2003, where what were believed to be native greenbacks had been stocked after a rotenone treatment to remove brookies. I fished most of the day and I did catch a mess of cutthroats. But, toward the end of the day, I managed to land two 10-inch brook trout, fish that were thought to have been eradicated. Just a few years later, the cutthroats were gone, and the stream had returned to it previous state as an invasive brook trout stronghold.

Brookies seem to have an unparalleled life force—they simply procreate their way to a complete overhaul of native trout waters (and eventually eat themselves out of habitat, forcing their populations to stunt—a four-inch brookie in a Rocky Mountain stream might be sexually mature).

They can thrive in the smallest of mountain streams, and they love habitat that native trout love, too, like beaver ponds and side channels, which can be difficult to effectively treat with piscicides like rotenone or antimycin. Any fish that can nose up into the shallowest waters, or deep into the muck of a beaver pond can survive long enough to outlast the poisonous effects of these chemicals. The simple biological determination of brook trout has been a burr under the saddle for many a fisheries biologist over the years.

But, starting in the late 2000s and into the early 2010s, Idaho Fish and Game biologists at the state’s Ashton fish hatchery began considering a novel approach to defeating the brook trout scourge in the West.

Like the brook trout, the Bull Trout [Salvelinus confluentus] is not a trout but a char. Thom Glace,

Every trout, just like every human, has either male (XY) or female (XX) chromosomes. According to a report published by the American Fisheries Society in 2018, XY male brook trout can be “feminized” by exposing them to estrogen. In a laboratory setting, these feminized XY brookies are then crossed with normal XY male brookies. About a quarter of the offspring from this hatchery experiment will be males, but with two Y chromosomes (YY).

Through continued breeding in the hatchery setting, after a few successive generations, the study achieved its ultimate goal—the first-ever development of a “Trojan” broodstock that is entirely YY—which the Idaho Fish and Game study indicates was “produced in four years at relatively low cost.”