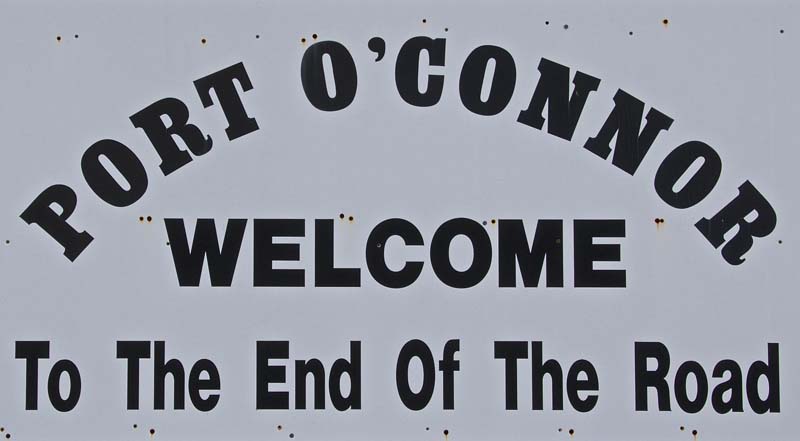 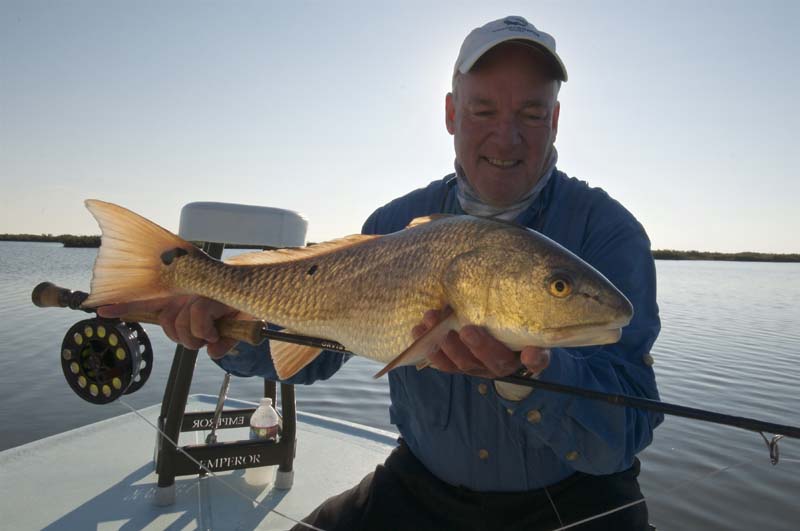 If one more G.D. boot scootin’ cowboy with a fly rod and a skinny water skiff drawls: “Ya’ll shoulda been he-uh yes-tuh-day…” I swear there will be violence a commencin’ at the launch ramp! 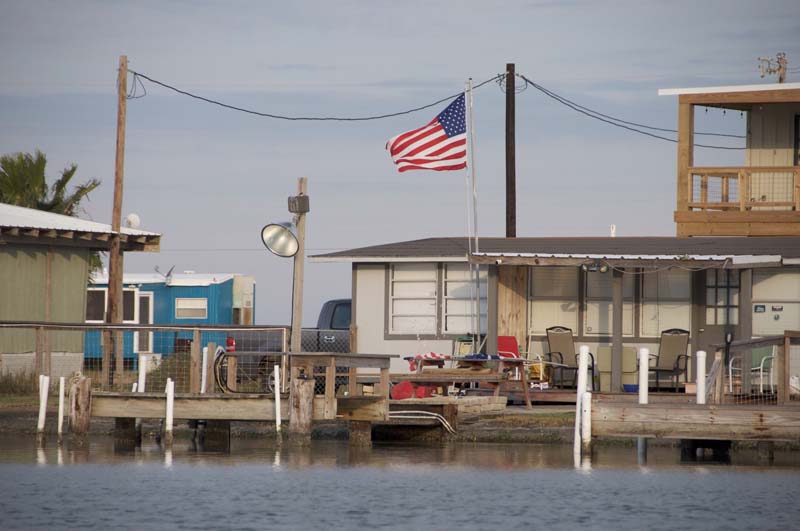 For 12 years I have been regularly invited by a business associate friend (known only through Facebook) to come fly fish in Port O’Connor, but somehow with kids in school/college, business conferences in India, divorces, several trips to Cuba (FlyLifeMagazine.com, “Part One” and “Part Two,” and “Profile“) I had not been able to “pull the trigger” on a Texas trip, so to speak. 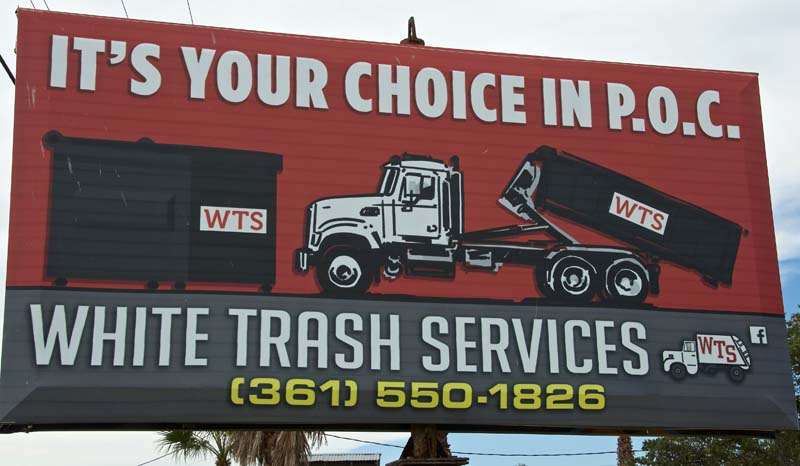 A halfway decent mid-December forecast for the south coast of Texas, the enticement to fish with Captain Scott Sommerlatte (of Texas and Everglades fame), and the relatively new fly fishing husband of my FB friend was too good an offer to pass up.  I drove 3.5 hours southwest from Houston to a little itty-bitty fishing spot called Port O’Connor, Texas, kinda between Galveston and Corpus Christie, or in fishing location terms between Matagorda and Aransas Pass.  They are literally “the end of the road”, I know because I saw the sign. 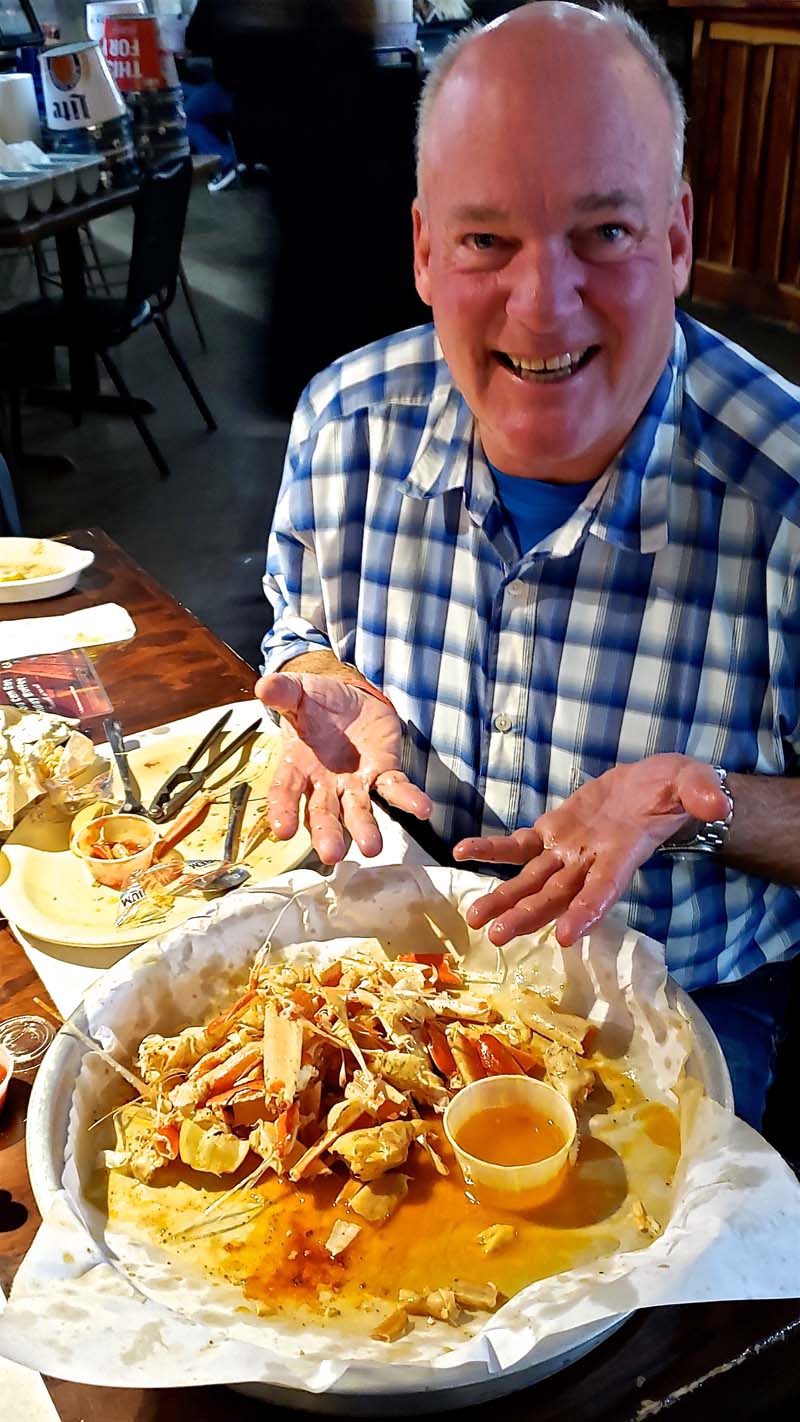 Bubba’s Crab Legs, after… [Rick good with the home cookin’].

You would not think a place in South Texas like Espirto Santo Bay could have 44 degrees air temps, winds blowing 25, (with gusts to 35), and scudding clouds under leaden skies, especially when all the various weather services were still calling for winds 10-15, mostly sunny skies, and temps reaching the upper 50’s.  But then you and I would both be wrong…Welcome to Texas redfishing, now it was time to “man up”, add some more layers, quit bitching, and go fishing. 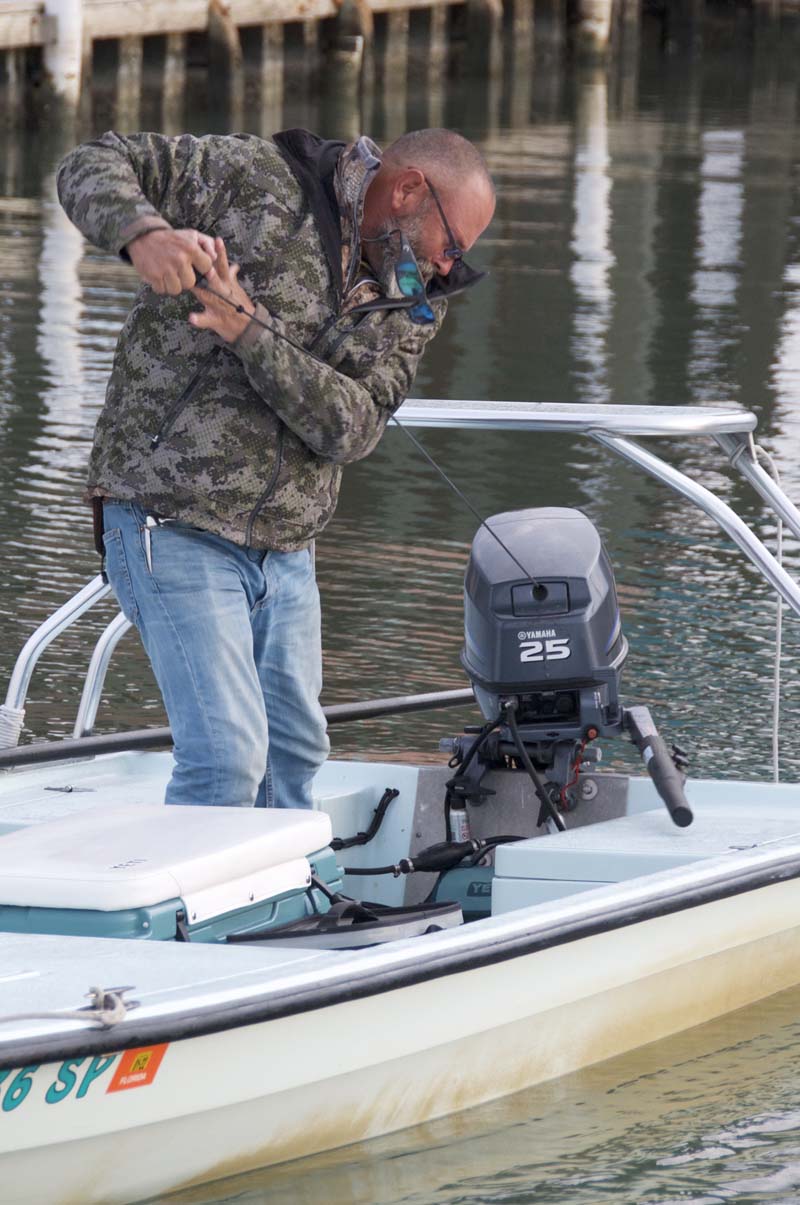 On Day One, we met Captain Scott Sommerlatte at a private, gated fishing camp near Seadrift, Texas, and then proceeded to meet “Teq” (short for “Tequila”, natch), his rambunctious 16-week-old moose of a golden retriever puppy.  We then kicked the tires on the boat trailer, drank cold coffee, slapped our chilled hands together, hopped from foot-to-foot and finally got all our gear stowed, stacked and/or squirreled away in Scott’s little seafoam green Hell’s Bay Whipray.  It took a number of pulls on the starter rope, and a handful of colorful words from Scott for the 25-horse 2-stroke to cough into a cold, rough idle.  We then mosied down the Intracoastal Waterway until we could speed-up, and then lit out for the “protected” grassy marsh lands of south-facing lee shore, west of Army Cut. 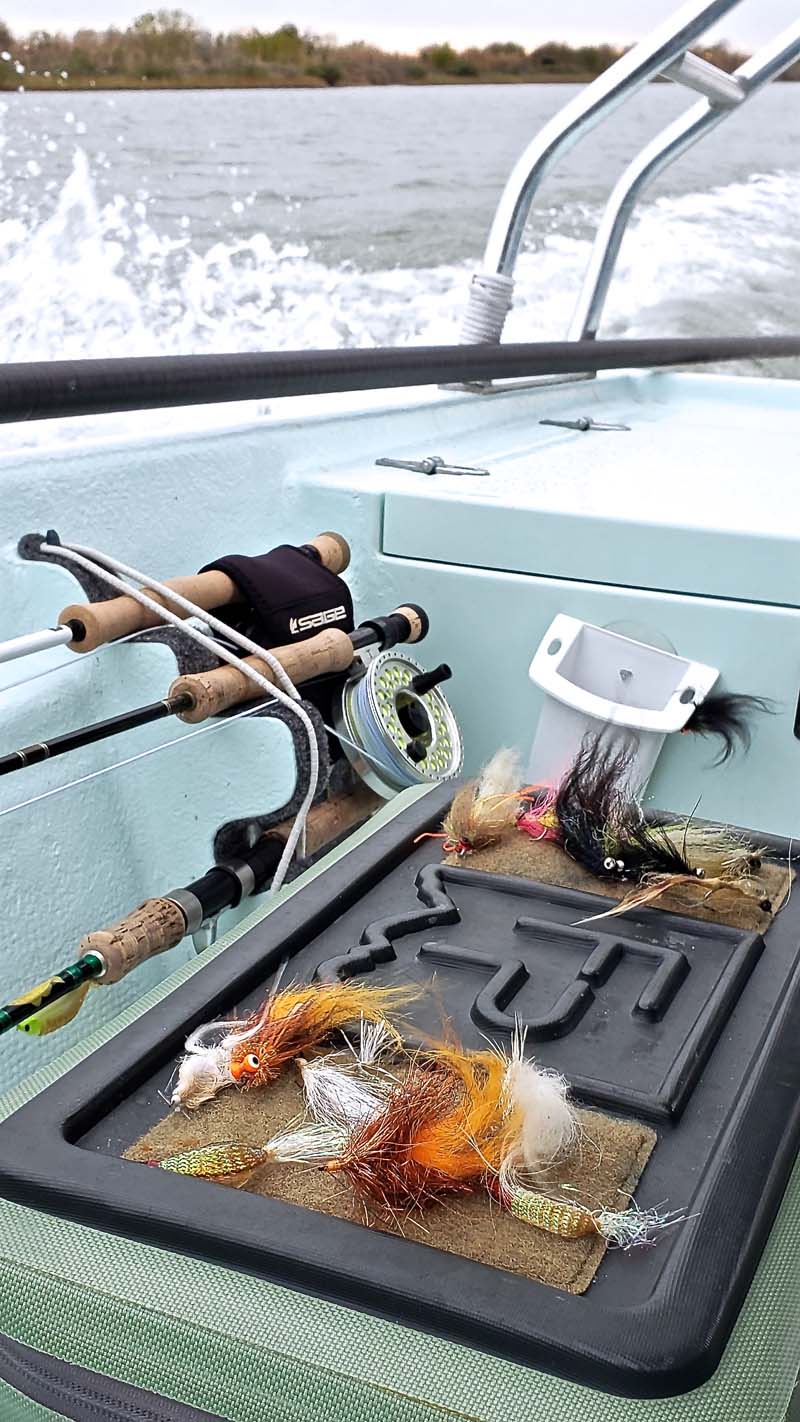 ‘Loaded with Possibilities.’ All flies tied by Captain Scott Sommerlatte.

I proceeded to go through the usual ritual humiliation ceremony of showing the captain my “redfish flies”, and received the standard reply, “Some of these are very nice, but they won’t work here…” whereupon he pulled out a ratty lookin’ specimen that had seen more mouths than a $25/hour dentist, tied it on, and said “Now go fish!”  Between my host, David, and I, we took turns in the bow scarring the living bejabbers out of all sorts of redfish, flounder, speckled seatrout, and more than a few angry wading birds over the next few hours. 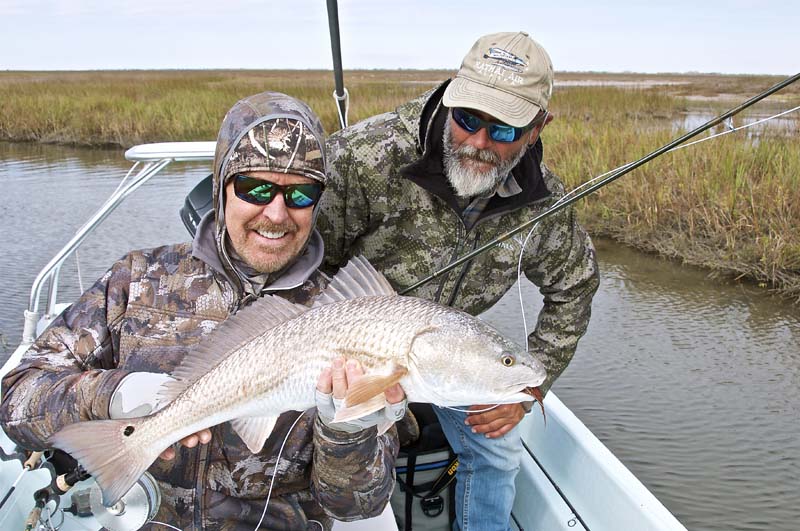 ‘David Fleig, on the board.’ The hanging fly tied by Captain Scott Sommerlatte.

With essentially no light and water temps closer to what you’d find Lone Star Longnecks chilling, we never had a prayer as the fish just were not cruising the skinny water in the bays, lagoons, creeks or “drains” as they call the water-filled cuts coming out of the marshland.  Scott kept asking the weather “gawds” to give us a little sun so as to warm-up the shallow mud banks just a bit to get the local seafood a bit more active.  That wasn’t in the cards. 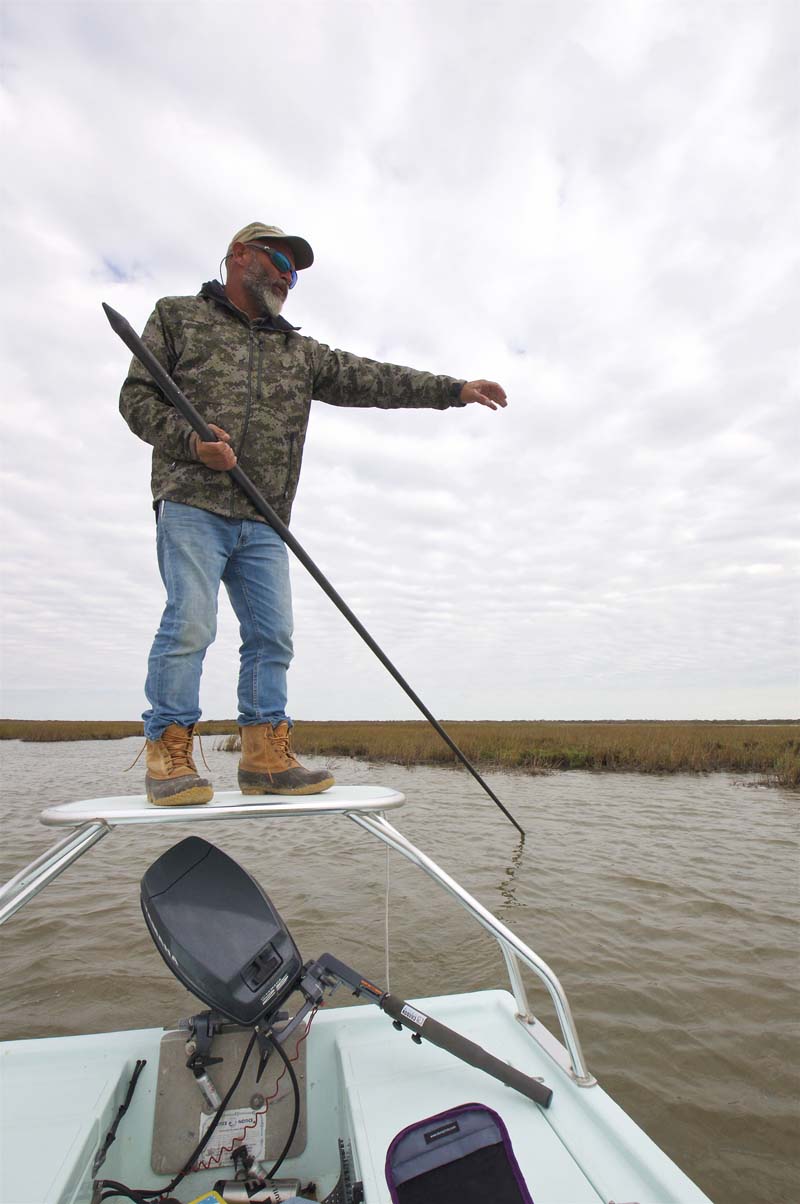 Later, with the December sun just past it’s low zenith, we experienced about an hour of partially decent light, as we finally moved out from beneath the worst of the high clouds.  While the reds were by no means hot to trot, if you managed to get a fly to them, they would at least turn and follow it for a few soft bumps, followed by a pause, and then another bump or two.  Andy Mill talks about the need to “feed a tarpon”; well much the same can be said for Texas redfish when they are not all hepped-up. 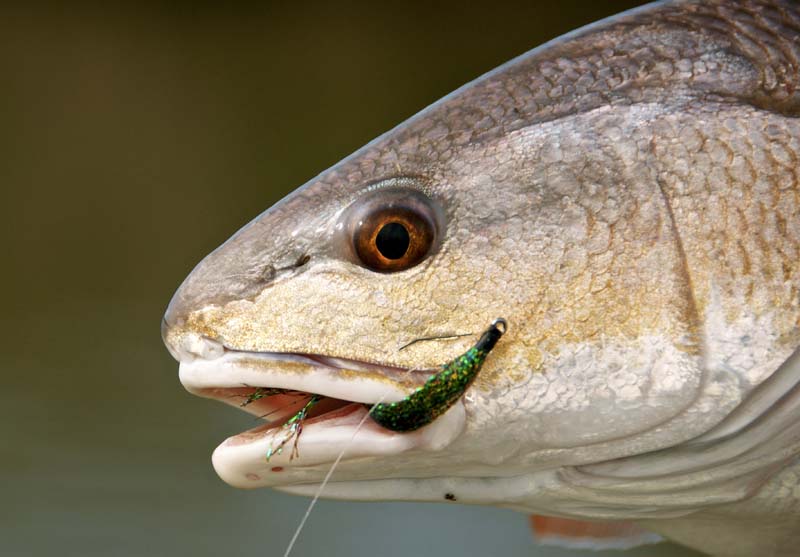 With too much time-in-grade throwing flies at bonefish and adjusting the distance so as not to spook them, I was at a complete disadvantage versus my angling companion David.  He is well-skilled with a fly rod, and the art of teasing reds into a swirling strike.  He and Scott both “read” the fish, it’s movement, or lack thereof, the beat of the tail, and the flaring of the fins as they grab the fly.  Me, I just got all wrought-up and proceeded to cast over the fishes’ shoulders (or tails), or threw five feet in front of the fish, all summarized in Scott’s muttered comment, “No bueno!” 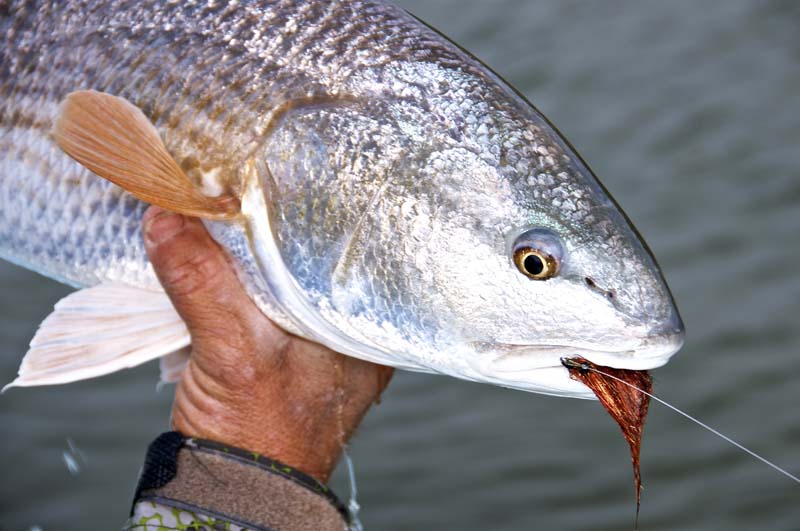 These well chilled reds wanted a fly just a few inches in front of their nose, and a couple of inches past the eye that is “away” from the angler so the fly gently jumps out and away from them.  You have to remember that seafood is not usually suicidal, and when threatened, tends to flee, not attack.  A redfish worth its’ salt will bolt when a shrimp-y looking fly starts jumping towards it.  In the wind, and with the cold water, you needed to drop a fly on about half a neckerchief at 25-40 feet. (We simply could not see them further away because of the poor viz and they were not waking, tailing or cruising about in the skinny water.)  David had a spectacular day considering the tough conditions with seven or eight redfish brought to hand; I eventually got off the schneid with “a couple cute little ol’ thangs.” 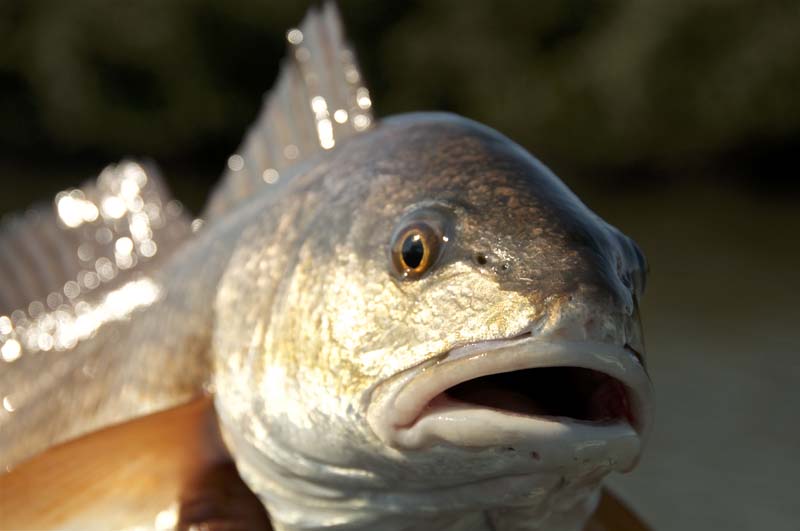 Day Two dawned just as windy, an ensy-weensy bit warmer, and much better light. Scott decided to head south to the mangrove-lined saltwater lakes of San Antonio Bay.  The wind was at our back, and we were assured it would lay down a bit in the afternoon and not give us a righteous butt-kickin’ on the way home. 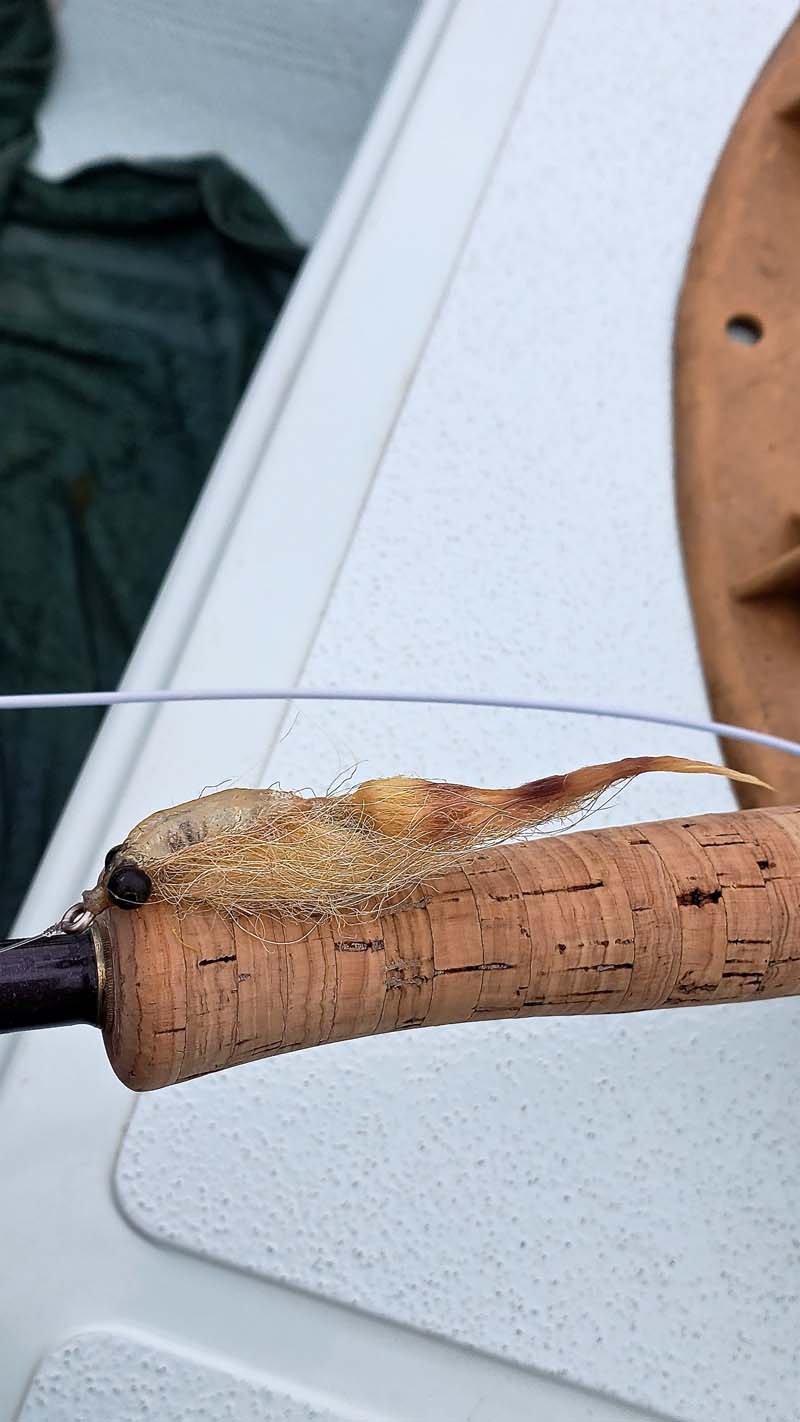 What a difference a day makes. While it was another very slow start due to the low angle of the light and the cold water, by 11:30 AM we started to see fish moving at a distance far enough away to set up for a shot at them.  Oh, we still spooked out a ton of fish that weren’t quite up from their chilly siestas, frequently causing them to bolt into the fish we’d been stalking for the last 5-6 mins, but hey, that is why it is ‘fishing” not “catching”… 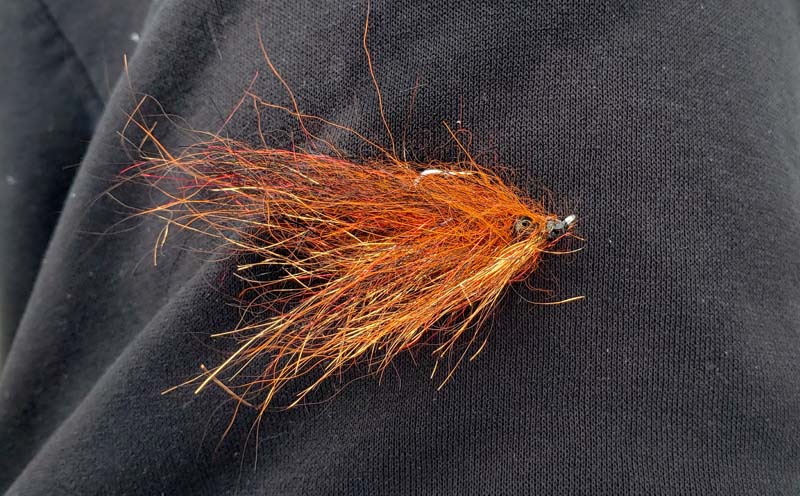 In seeing the fish sooner, one is able to gather up one’s scattered senses into a semblance of a fly presentation.  And here, the cold water slowed up the fishes’ reactions so you could “doink” them a few times with a fly presentation and not blow them all to hell and gone.  David took some nice fish and through osmosis, I started to get a handle on David’s practiced optimal casting target/window, the twitch, strip, pause, bump of the retrieve, and a gentle sweep of the rod. (Ahem…note to self, the rod sweep is away from the direction the fish took the fly, and never, ever, up-and-over your non-casting shoulder; silly angler, big redfish are for locals, sigh.) 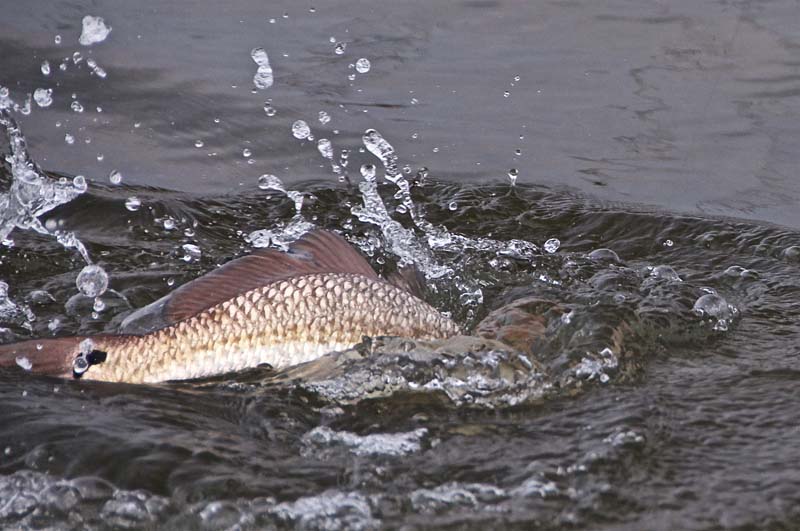