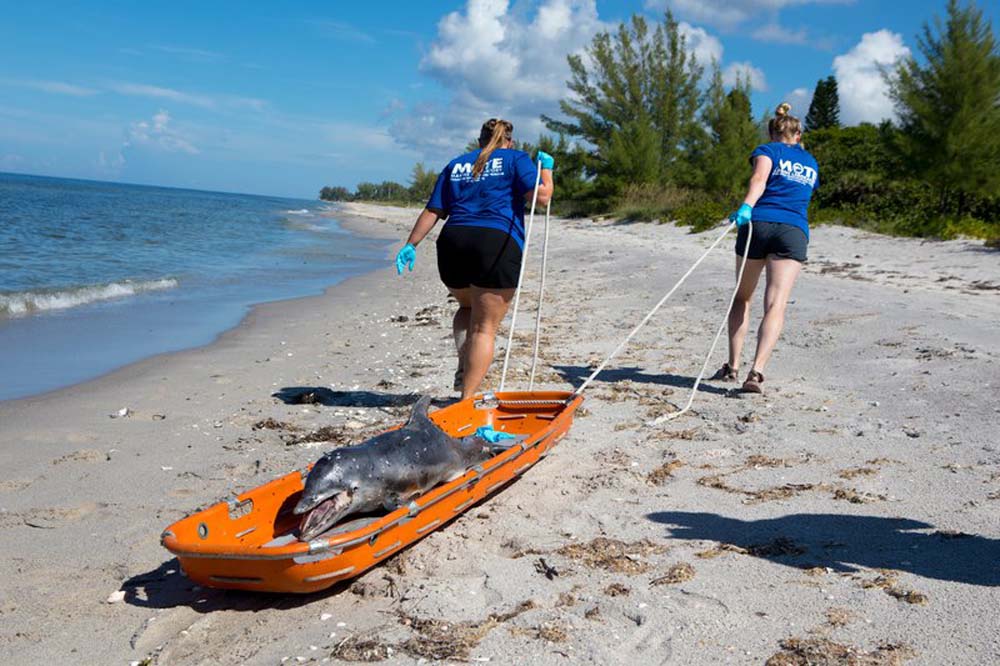 Simple: Too many nutrients flowing into coastal waters from human activities 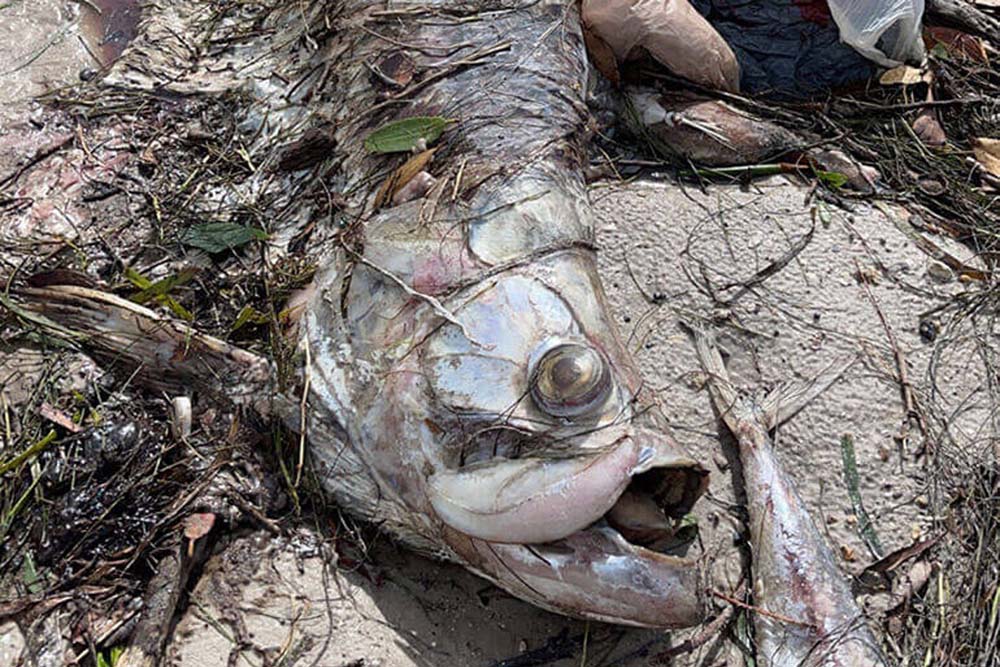 Our fisheries are dying, what are we going to do about it?

It wasn’t that long ago that such a statement would have been considered overblown and alarmist. But the terrible red tide devastating Tampa Bay is only the latest in a long line of media headlines. In fact, bad water quality, harmful algae blooms, seagrass die-offs, and fish kills have become so common that they often don’t even make the headlines. Conversations among anglers and guides are no longer about where the fish are biting as much as where to go to find semi-clean water and no algae blooms. It’s like the movie Groundhog Day in the worst way.

Red tides, along with the other water quality problems, are becoming more frequent, wider spread, lasting longer, and are more intense. We know the causes – too many nutrients flowing into coastal waters from human activities, including wastewater, stormwater runoff, fertilizers, and industrial runoff – but so far we haven’t had the urgency and investment needed to fix the problems.

It’s telling that we can still share these posts covering several years as nothing has changed! Today we will begin sharing a series of posts on the problem, wrapping up with BTT’s recommended solutions.

Long-term problem with no short-term fix 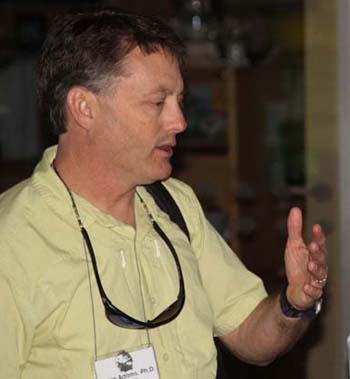 Florida, a state that depends on water – fresh, estuarine and marine – for its economy and cultural identity more than most other states is in a dire situation of its own making. Decades of water and natural-resource mismanagement, recently accelerated, are coming home to roost. The current focus is on the red tide, classified as a harmful algal bloom, occurring along the Gulf Coast. But this crisis is not an outlier; it is part of the new normal. Either ongoing or in recent years, there have been harmful algal blooms in the Caloosahatchee River, St. Lucie River, St. Johns River, Florida Bay and the Indian River Lagoon. Indeed, at some point in the last few years much of Florida’s estuarine waters have been impacted by harmful algal blooms.

The organism that causes red tide, Karenia brevis, is natural to Florida’s Gulf coast. The red tide blooms in this region originate offshore, and depending on environmental conditions like winds and currents, can move inshore. Despite being a naturally occurring phenomenon, recent research suggests that human-introduced nutrients are worsening the situation. A scientific study published in 2007, for example, found that red tide was 20-fold more abundant in coastal waters (where it encounters nutrient-laden runoff) than in offshore waters where red tide originates. The study also found that red tide was 13-18-fold more abundant in recent years (1994-2002) than historically (1954-1963), and that the seasons in which red tide occurred had expanded from mostly in fall to now include fall, winter, and spring.

Similar crises are occurring throughout Florida. Because Everglades restoration has stalled, not enough freshwater flows from Lake Okeechobee into the Everglades and then into Florida Bay. In 2016, this lack of freshwater caused algae blooms, fish kills, and an extensive seagrass die-off in Florida Bay. The water not flowing into the Everglades is instead being discharged into the St. Lucie River and Caloosahatchee River, where it has caused an harmful algal bloom so toxic that human contact is dangerous. The nutrient-laden water flowing out of the Calooshatchee River is also a likely source for enhancing red-tide blooms.

A recurring harmful algal bloom in the Indian River Lagoon, this caused by a “brown tide,” has resulted in extensive seagrass die-offs and fish kills. In recent years the St. Johns River has experienced harmful algal blooms of its own. Even some of Florida’s famous freshwater springs are experiencing algae blooms.

The first problem is the alteration of freshwater flows into coastal waters. The watershed of the Caloosahatchee River once was limited to southwest Florida. It now drains Lake Okeechobee’s watershed, which stretches to Orlando. And the Everglades and Florida Bay are nearly entirely cut off from the freshwater flows they used to receive. A similar scenario plays out at smaller scales for Florida’s other coastal waterways.

The second problem is that far too many nutrients are entering freshwater lakes, streams and rivers, which then empty into coastal waters. These nutrients come from Florida’s phosphate-mining industry, outdated sewage infrastructure, extensive use of residential septic systems, and agricultural and stormwater runoff. These nutrient sources not only contaminate the surface waters, but also the aquifers – the amount of nutrients in Florida’s groundwater are far too high. These groundwaters then seep into coastal waters through Florida’s limestone base. 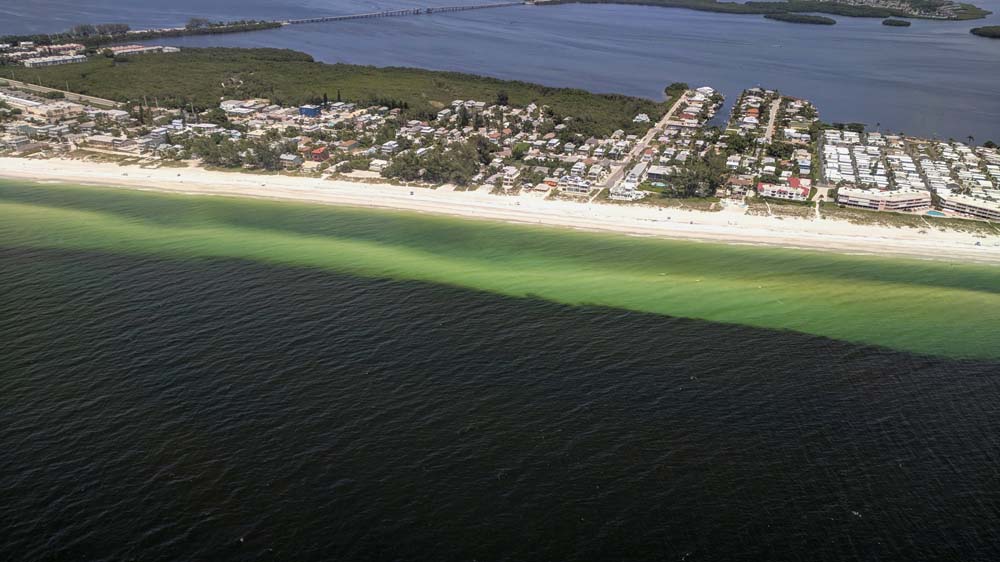 The Gulf Coast of Florida plays host to a deadly phenomenon: red tide. Rapid growths, or blooms, of microscopic algae occur in waters all over the world, but red tide refers to the explosive growth of one species, Karenia brevis, which calls the Gulf of Mexico home. Such blooms typically occur in late summer and fall when, after spawning about 10 to 40 miles offshore, populations of K. brevis spike and invade the shoreline—wreaking havoc on marine life, tourism, and human health.

All of this has a negative impact on Florida’s economy. The annual economic impact of Florida’s saltwater recreational fishery exceeds $7 billion, more than any other state, supports thousands of jobs, and is an important part of Florida’s economy. The commercial fishery exceeds $1.6 billion. These fisheries depend upon good water quality and healthy habitats. As the health of Florida’s water and habitats has declined, so have the fisheries – incomes have declined, jobs have been lost and businesses have closed.

The rate of Florida’s environmental decline has increased in recent years, but it has been long in the making. It will be similarly long in recovery. But unless Florida takes seriously the poor state of affairs and embarks on an intense and long-term recovery plan, the future is dim.

Aaron Adams is the director of science and conservation for the Bonefish & Tarpon Trust in Miami. He is also Senior Scientist, Harbor Branch Oceanographic Institute Florida Atlantic University.

Aaron received a bachelor’s degree from St. Mary’s College in Maryland, a Master’s degree from the College of William and Mary, and a Ph.D. from the University of Massachusetts Boston, and also holds a Coast Guard Captain’s License. He has lived, worked, and fished on both coasts of the US, and in the Caribbean, where he has been conducting fish research for more than 25 years. His pursuit of effective fish and habitat conservation are rooted in his years growing up near Chesapeake Bay, where he witnessed the decline of the Bay’s habitats and fisheries.

As Director of Science and Conservation, Aaron is responsible for formulating, overseeing, and implementing BTT’s science and conservation plan, and applying scientific findings to conservation and management via interactions with resource management agencies and other non-governmental organizations.

Aaron has been an author or co-author on more than 70 peer-reviewed scientific publications, has authored three books, and contributed chapters to four books. In addition to his scientific focus, he spends considerable effort translating fish science into angler’s terms. Aaron has been an avid angler since the age of five, and was even known to skip school in pursuit of fish. Also at a young age, the why and how of fish and their habitats became a passion. The career of fish conservation scientist is a perfect combination of these passions. You can see his scientific publications on his Researchgate page . . .