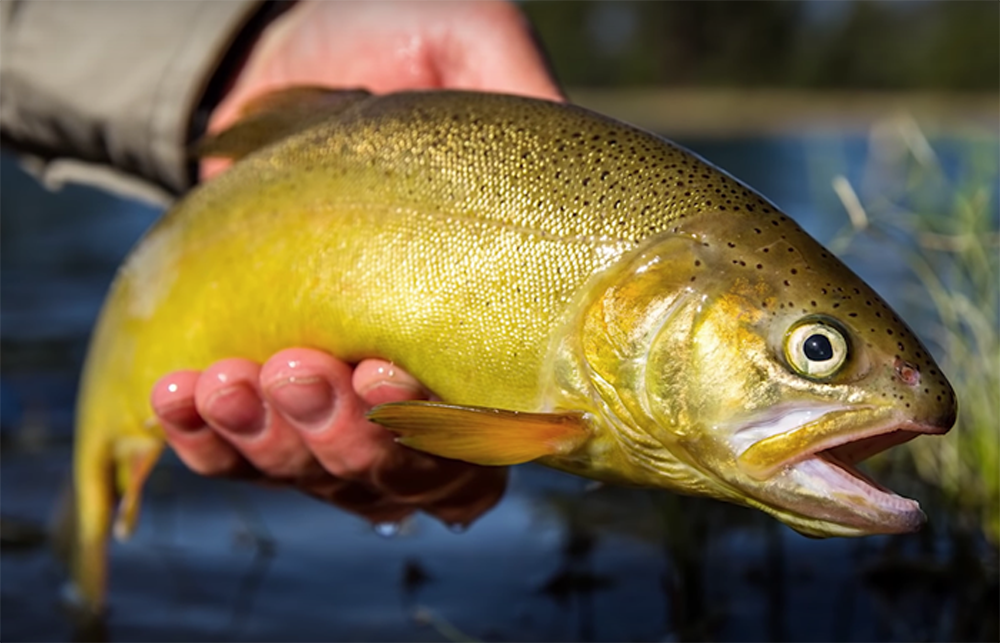 Trout in Trouble: The Impacts of GW on Trout in the Interior West 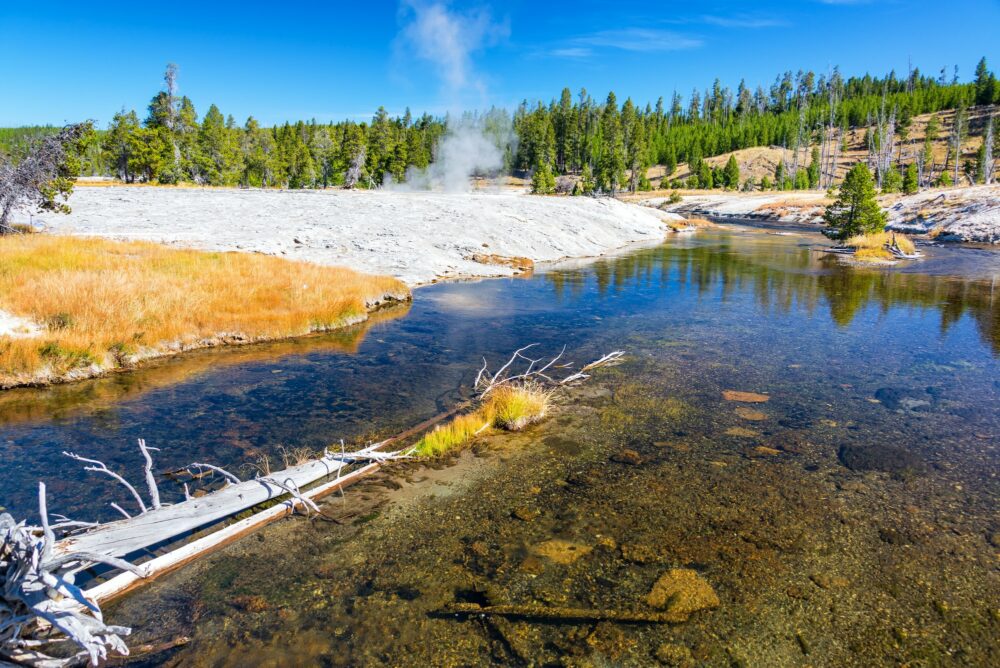 Trout in Trouble: The Impacts of Global Warming on Trout in the Interior West

Izaak Walton, author of The Compleat Angler and considered by many as the father of modern trout fishing, noted, “Rivers and the inhabitants of the watery elements are made for wise men to contemplate and for fools to pass by without consideration.” If you love wild trout, clean, cool water, and wild places, you must learn to speak more loudly, more clearly, and more frequently to protect and preserve a healthy environment for our kids, grandkids, and all future generations of trout anglers. — Craig Mathews

Global warming is the single greatest threat to the survival of trout in America’s interior West. If nothing is done to reduce human-produced greenhouse gas emissions—the primary culprit behind global warming— trout habitat throughout the Rocky Mountain region could be reduced by 50 percent or more by the end of the century.

The loss of habitat would bring fewer opportunities for anglers to enjoy sportfishing, resulting in serious economic consequences for those who depend on fishing, recreation, and tourism activity for their livelihoods. Although we are already seeing declines in trout populations and habitat throughout the West, it is not too late to avoid the most serious impacts of global warming on this important coldwater fish. 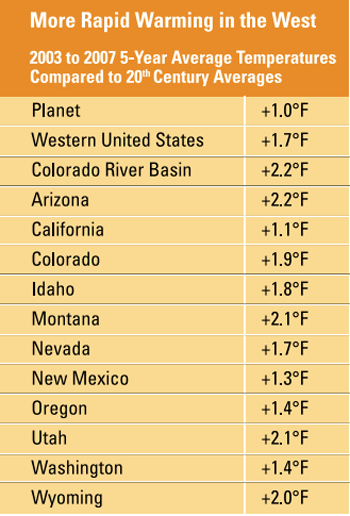 The unimpeded impacts of global warming on trout in the interior will be so sweeping that few populations will go untouched. Rivers like the Upper North Platte, the Green, the upper Colorado, the Fraser, the Provo, the Firehole, and the Gila—hallowed waters for trout anglers—will be dramatically altered by global warming.

The famous recreational trout fishery on the Bighorn River in Montana, for example, has struggled in recent years due to drought, declining reservoir levels, record-setting high temperatures, and reduced snowpack—all common impacts of global warming. Even tailwater fisheries once thought immune to warming due to their location below immense dams that discharge cold water from far below the surface will be affected.

And the impacts of global warming will reach far beyond the magnificent trout, profoundly affecting economies throughout the region. Trout fishing has become integral to local and state economies in the interior West.

In Colorado alone, sportfishing in 2002 had a total economic impact of more than $800 million and supported nearly 11,000 jobs.

In Montana, with its relatively small population of 950,000 people, angling generates nearly $300 million per year. With each percentage decline in trout populations and stream miles occupied by trout—or reduction in the opportunity to fish due to fishing closures or fire—there could be a corresponding loss in jobs and income for the region. 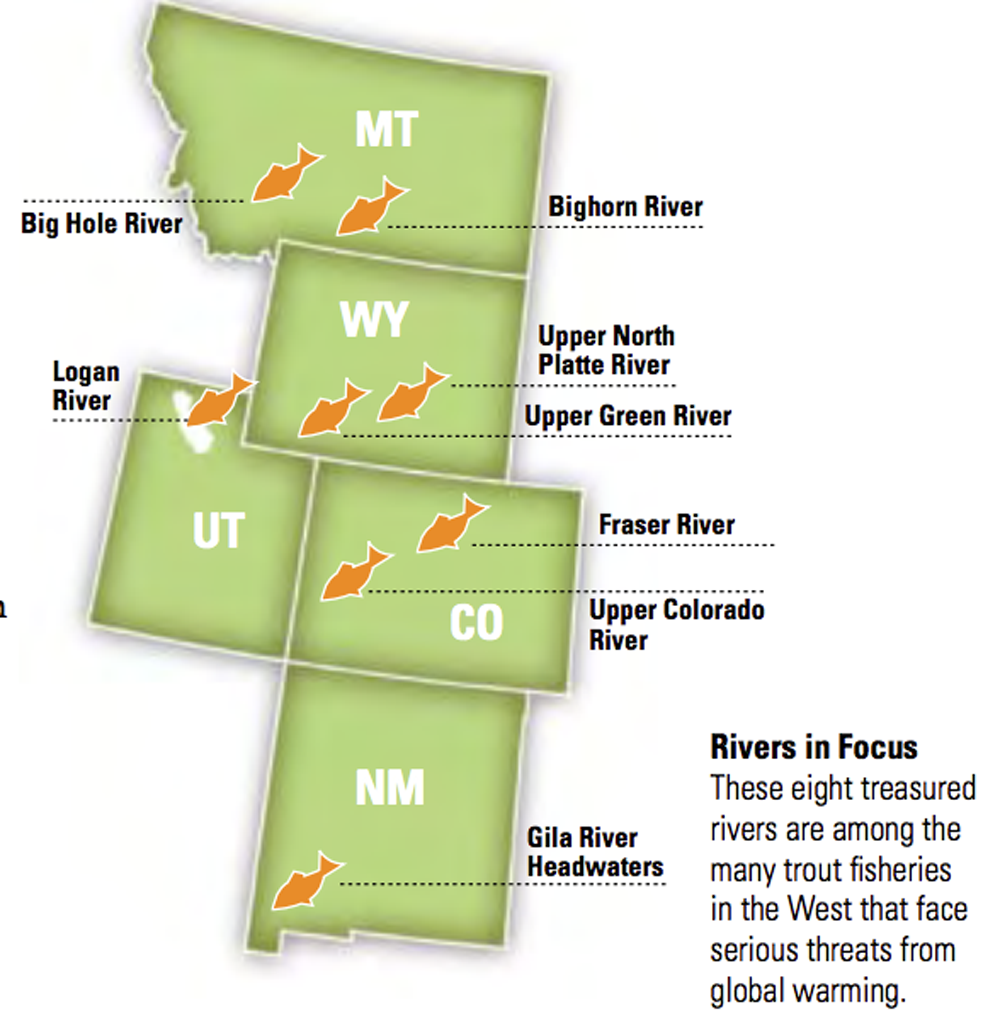 In the West, the Colorado River is representative of the best recreational opportunities the region has to offer. Colorado’s most famous river, big and bold, it is the one stretch of water people often think of when they consider what a western river is supposed to be.

The upper Colorado River in Colorado is a spectacular trout fishery. Beginning high in the Rockies in north central Colorado, the river tumbles steeply down until it meets the Fraser River. For roughly 20 miles downstream from the Fraser, the reach has been designated blue ribbon trout waters by the State of Colorado. It offers some of the best fly-fishing in the state for wild trout. Rainbows and large brown trout are commonly found amidst its deep pools, long riffles, and boulder-strewn runs.

In recent years, the Colorado River has received a lot of attention because low flows have impacted water storage levels in its massive downstream reservoirs like Lake Powell and Lake Mead, creating questions over whether those reservoirs will ever again fill to capacity. That dilemma has its roots, in part, in the upper reaches of the river in Colorado. Drought, reduced snowpack, and early snowpack depletion, coupled with water withdrawals for human and agricultural consumption, have all played a part in impacting normal flows on the Colorado River. These altered flows hold potential negative impacts for the Colorado River’s famous trout fishery—consequences that could become far greater as the impacts of global warming continue to increase.

Climate statistics and flow data tell the story of a region struggling with the impacts of global warming. Since 1998, the Colorado River basin has seen below-average snowpack for 8 out of 10 years. The average annual streamflow in the central Rocky Mountains over the last century has decreased by about 2 percent per decade, and since 1950, stream discharge in the Colorado River basin has similarly decreased. The average air temperature in Colorado was 1.9 degrees Fahrenheit warmer from 2003 to 2007 than the average for the period from 1901 to 2000.

Recent droughts in Colorado, coupled with reduced snowpack and quick melting of snowpack, have had a direct impact on river flows throughout the state, including its namesake. The span of time from 2000 through 2004 was the first period since modern record keeping began in 1922 in which there were five consecutive years of below-average flow in the Colorado River.

Climate modeling projections for Rocky Mountain National Park predict continued earlier spring runoff, lower flows from late spring to fall, decreased snowpack, and decreased soil moisture. These impacts are expected to result in longer and drier summers. For trout and trout anglers who value the Colorado River, especially the fishery on its upper reaches, this should be cause for serious concern.

The potential for fire due to global warming also threatens to negatively impact the Colorado River fishery and to diminish the economic activity fueled by the river. A Colorado State University analysis of the impacts of climate change on Rocky Mountain National Park determined that, under predicted climatic changes, fire frequency and extent is expected to increase substantially. Recent fires and fire conditions in Colorado have already impacted tourism, including angler visits and expenditures. For upper Colorado River counties like Grand, Eagle, and Garfield, which receive roughly $70 million in annual economic activity due to fishing, the potential impact could be large.