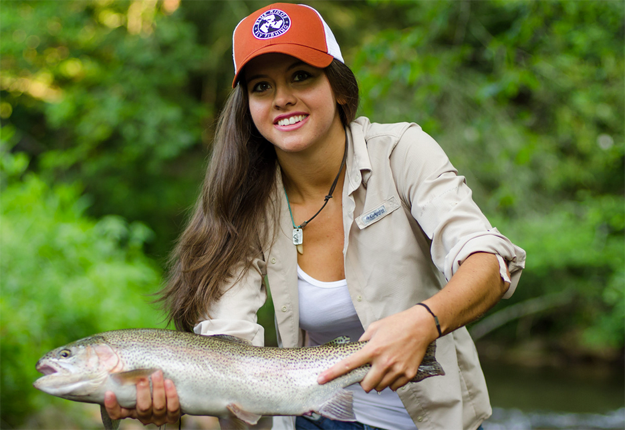 Fly Females: Six Women Who Are Revolutionizing the World of Fly Fishing 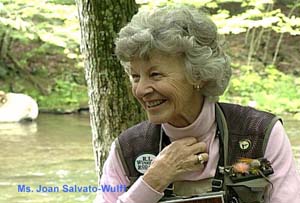 [dropcap]T[/dropcap]o the casual observer, the world of fly fishing may look like a totally male-dominated endeavor. Dig a little deeper, however, and you will inevitably discover the long-held and enduring legacy that female anglers have imprinted on the sport.

It was Joan Wulff who changed the sport forever.

In 1943, at the age of sixteen, she walked away with top honors in the national dry fly accuracy championship. From there she would go on to rack up twenty-one additional casting titles before ultimately winning the National Fisherman’s Distance Fly Championship with a cast of 136 feet against a field of all male competitors. By the early 1950s, a time when women’s rights were severely limited, Joan Wulff was widely regarded as the best fly caster in the world.

Wulff used her deep knowledge and innate understanding of fly fishing and techniques to become one of the single most recognizable figures in the professional fly fishing game.

At age 89, Wulff is still heavily involved in the art she mastered many years ago, mainly through teaching and inspiring both male and female anglers alike.

In the wake of her success, increasing numbers of women have found avenues into the historically male-dominated sport.

Today, fly fishing is experiencing a golden age of female participants. Here are a few of the many female anglers making waves right here in the Blue Ridge and around the country. 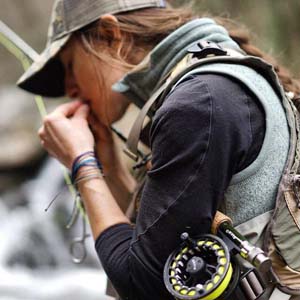 Katie Cahn grew up fishing the foothills of the Blue Ridge Mountains near the border of North and South Carolina on land settled by her family in the 1800s.

“We would drown worms in the creeks and use whole cans of niblet corn just to catch war-painted shiners on spin rods,” Cahn said of these formative years. “This is when bobbers were called bobbers—not strike indicators.”

Katie didn’t discover what would become a lifelong love of fly fishing until her college years at Western Carolina University.

“For three years, I lived 50 yards from the Tuckasegee River. I spent many study breaks at the river fly fishing. During those years I got to know the Tuckasegee, Nantahala, and a few other streams pretty well.”

It took time, but with focus, perseverance and a little bit of mentoring, Katie soon became a highly proficient angler.

“I had a good friend teach me the basics, and like many, I struggled in the beginning. It took weeks of getting caught-up in trees and untangling line. Not much has changed except that I catch fish now.”

She’s still combing the rivers and streams of the Blue Ridge. “I live five miles from a delayed harvest section and try to end my days with a ‘happy hour’ session. On the weekends, you can find me in Western North Carolina. I prefer fishing for wild trout in areas around the Blue Ridge Parkway, but if I’m looking for big ole’ stocker trout, you may see me on the Tuckasegee River in Cullowhee, the Watauga River, the Davidson or the East and North Forks of the French Broad.”

She advises other would-be female anglers to stick with the sport, even if barriers to entry like expensive gear and the long learning curve get in the way.

“Fly fishing takes patience, and the more you do it, the better you get. It’s an expensive sport, so borrow or rent gear in the beginning until you know it’s what you want to do for years to come. If you can, try to get into a women’s flyfishing group around your area.

If you are in Western North Carolina, look up Headwaters Outfitters, advises Katie. The owner, Jessica, is dedicated to helping female angler newbies feel more comfortable with the sport, and she offers a women’s retreat every spring. “I’ll be there this year and would love to help any and all women interested in fly fishing.”

Cassie Spurling began fly fishing at age five in the mountains of North Georgia, which she still calls home today. Under the tutelage of her father, she learned the ins and outs of what would one day become a full-time obsession.

“My father is one of the most impactful inspirations I’ve had in my flyfishing journey,” Spurling says. “I remember being frustrated when I was first learning as I watched him effortlessly present a fly to unsuspecting trout. I wanted to cast as well as him.”Over the years, as Cassie continued to pursue her passion for all things trout, she eventually took her skills to the next level, and a premier North Georgia guiding outfit took notice.

“As I got older, I had the opportunity to guide in North Georgia, which broadened my knowledge and perspective of fly fishing even more,” she said. “I love sharing my passion with others and cherish the ability to teach the sport that has become such a huge part of my life. There is nothing like getting a client on their first fish and seeing the excitement and joy in their eyes.” 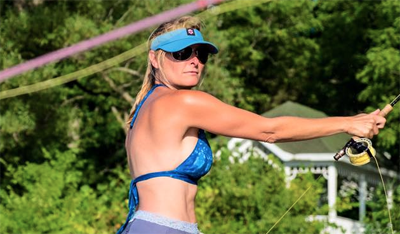 Jen Ripple learned to to fly fish on the banks of the Huron River not far from the campus of the University of Michigan, her employer at the time.

“I was bored and looking for some entertainment when I saw that a fly tying class was being taught at a local fly shop.”

Before long, Jen was obsessed.

“That spring, as soon as the ice melted on the Huron, I spent countless hours on the river fishing for smallmouth bass. I didn’t realize until two years later that I was ‘supposed’ to be fishing for trout with my fly rod.”

A few years later, when Ripple left Ann Arbor for Chicago, she immediately got involved with a fly tying class at a local rod builder and fly shop in the city.

“There was a new Midwestern fly fishing magazine at that time and the editor was teaching my tying class,” Ripple says. “He knew I could write, and asked if I would be interested in writing a women’s column for his magazine, A Tight Loop.”

She continued to write the column for about three months but eventually grew restless.

“At that point I really felt like I wanted to write for a women’s magazine, but I was shocked to learn that there wasn’t one. So I decided to approach my editor about starting my own.”

From that conversation, Dun Magazine—a publication that showcases female anglers from around the globe—was born.

Now Jen does work for Dun from her home base in Dover, Tennessee where her backyard is adjacent to 178,000 acres of public land known as the Land Between the Lakes.

“My favorite fishing spots around here are located in Kentucky Lake and Lake Barkley, where I fish predominantly for largemouth bass and crappie. The area is a hot spot for traditional bass tournaments, so it’s fun to see the look on people’s faces when I start catching giant largemouth on the fly from the comfort of my drift boat.”

Born and raised in the shadow of the Northern Rockies in Chilliwack, British Columbia, April Vokey has been fishing in one capacity or another for most of her life.

“I think it was the sheer excitement of being outdoors that drew me to fishing in general,” April says. “I’ve always loved water— creeks, rivers, lakes, the ocean, rain—all of it, but I loved the trees and mossy forest bottom just as much.”

It was an excitement that would eventually lead her to discover fly fishing, particularly the variety that involves spey casting to giant Steelhead in the waters of British Columbia, at the early age of 18.

“I was a menace out there,” Vokey said of her earliest fly fishing expeditions. “But I spent my nights watching instructional VHS tapes about how to cast, and eventually my flailing started to look alright.”

By the age of 23, she would own her own guiding service specializing in Steelhead trips on B.C.’s famed Skeena River, and in 2011 April joined the Patagonia ambassador team, where she now assists in the design and direction of an upcoming women’s line of fishing apparel.

“It has always been a shame to me that fly fishing is perceived as a man’s sport. There is truly nothing overly masculine about it,” she said in a 2012 Q & A with Fly Life Magazine.

“Fly fishing requires finesse, timing, passion, excitement, intrigue and dedication—descriptives that are not sole features of either gender. I urge women who have not given this sport a try to skip their next yoga class or hike. Tranquility or excitement, whatever it is that you’re looking for, why not follow Mother Nature to the river to find it?”

Today April hosts a popular fly fishing podcast called Anchored with April Vokey where she interviews some of the most influential people in the fly fishing game. In a recent episode of her podcast, April sat down with fly fishing legend and pioneer Joan Wulff to bring the female fly fishing revolution full circle.

Wulff launched the female fishing revolution over 70 years ago, and now it’s innovative industry leaders like April Vokey who are inspiring a new generation of women to wade out into new waters.