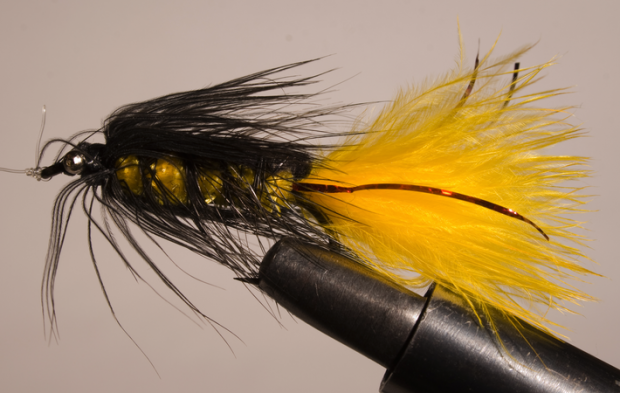 [dropcap]T[/dropcap]here have been many flies that have made the bigs – become legendary and have an association with a name. A few names on that legend category list are Lefty Kreh, Bob Popovics, Cam Sigler, Bob Clouser, Lee Wulff, George Griffith, Kelley Galloup, Don Gapen, Randall Kaufmann, Charlie Smith, John Barr, Dave Whitlock, Stu Apte, Al Troth, and Larry Dahlberg. Yes, there are more.

Perhaps not so strangely, but strangely nonetheless is that the most productive fly ever invented, the Woolly Bugger has hardly an author well-known or associated with it. Even the magazine that has everything you’ll ever need to know about fly fishing, Field & Stream, recently blew it completely. Well, almost completely. John Merwin had an article titled The 25 Greatest Flies of All Time. In it he completely misses the boat by not knowing the author of the Woolly Bugger or its catch capabilities – just calls it a trout streamer. Well, he got part of it right – “best 25” so we can leave it at that.

For those into the history of such things, it’s an easy shout-out: Russell Blessing, Harrisburg, Pensylvania native who passed away in October of 2009. 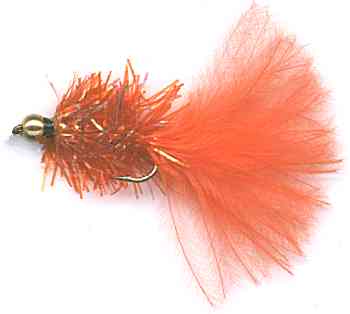 Orange bugger. The Old English Fly Shop. A bugger is both tyer and material adaptive – anything goes, just like Lefty’s Deciever.

Here’s more about the fly by Craig Moore of The English Fly Fishing Shop, excerpted and edited as follows.

A Harrisburg, Pennsylvania fly tier, Russell Blessing tied the first “Buggers.” He added a marabou tail to a Woolly Worm fly, to help suggest a swimming movement as the fly was retrieved in the water. He found that even if fished dead-drift the fly still had movement. The Woolly Worm is a very old fly that can be found in Izaak Walton’s 1653 book “The Compleat Angler.” Russell’s original Woolly Bugger had a black marabou tail, and a black hackled olive chenille body.

He had designed it to fish the smallmouth bass in the streams near his home. He had been trying to imitate the dobsonfly lava

Back in 1967 on a hot August afternoon flyfishing journalist Barry Beck was having a hard time getting the fish to bite on the Little Lehigh River in Pennsylvania. Other flyfishermen nearby were also having the same problem, that is all except one, Russ Blessing. In a 30 minute period, he netted four nice trout. Barry went over and asked what fly he was using. Barry was shocked to find it was a streamer. This type of fly normally was not very productive on the Lehigh River and especially in August. Russ, a true gentleman fly fisherman who was always willing to share his knowledge of fly-fishing and fly-tying gave Barry one of his Woolly Buggers to try. Barry’s luck changed, and he started to catch trout. Barry was so impressed that when he met Russ in the parking area just as he was going home, he asked for more information about the fly. 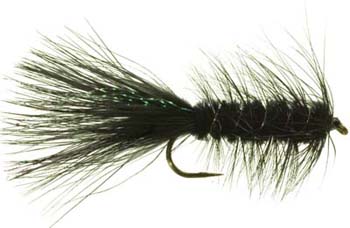 The original version was black.

Barry published an article on Russell Blessing’s wondrous Woolly Bugger in 1984. The rest is history. It became so popular that it is now an American standby. Woolly Buggers catch trout, bass, and salmon in both Atlantic and Pacific rivers, steelhead, even saltwater flats dwellers. It would not be an exaggeration to say that there is hardly a fish that swims that could not be caught with a Woolly Bugger. . . . Obviously the Woolly Bugger may not be a glamorous fly, but it deserves to be in everyone’s fly box for all kinds of fly fishing, from warm water to saltwater. Russ Blessing retired in 1996 and when asked what he now did with all his spare time he replied, “fish.”

There are dozens if not a hundred YouTube or Vimeo tying videos on the Woolly Bugger. Here is one of the best and our favorite – Tim Flagler’s from Tightlines Productions